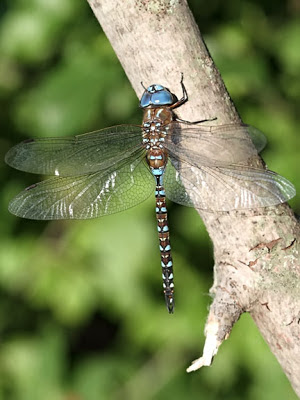 The blue-eyed darner is a large dragonfly that is typically found in the western US down into Central America. Until the past few years there were very few records of this species in Minnesota and those were all in the southeast corner of the state. It is possible that this was because the state was very poorly surveyed until the Minnesota Odonata Survey began several years ago. In the past few years sightings in Minnesota suggest that there range may be more extensive then first thought. It is also possible that there range has expanded or changed due to climate change. This theory is made more possible by the large number of sightings last year, when we had an unusually mild winter and early spring. This year has been quite the opposite, weather wise, and I have not heard of any sightings of this species in Minnesota so far this year.

What a fantastic photo, the eyes gleam and the wings glisten. I am impressed with the impossibly small waist it has. Beautiful!