It's owl a matter of luck

My wife and I have always been big fans of raptors, owls are her particular favorite. In our travels we have seen snowy owls, great grey owls, barred owls, and burrowing owls but up until this year we had never had the luck to see one of the most common North American owls the great horned owl. Then earlier year I was browsing local Internet bird sites and I read about an active great horned owl nest in a nearby park. This was the beginning of a run on great horned owls that we have been fortunate to see since.

I photographed the nest at Woodlake Nature Center almost every day for 2 weeks. It was a great learning experience. I got to witness a lot of great owl behavior including feeding, nest defense from angry crows, and the chick starting to branch. I documented some of this behavior in the first couple of posts of this blog. 1 2 3

Here is another picture that I have not posted yet. The mother left the nest with a large hunk of rabbit in her beak. 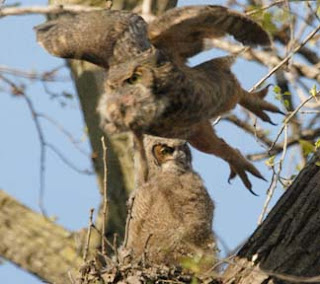 So while we were on our annual trip to Yellowstone we noticed several people in the Tower parking lot with spotting scopes pointing across the valley. I began talking to them and asked what they were looking at. They were watching a great horned owls nest in a hollow trunk across the valley. The nest was pretty far away but I wanted to get a picture since it was a different type of nest. 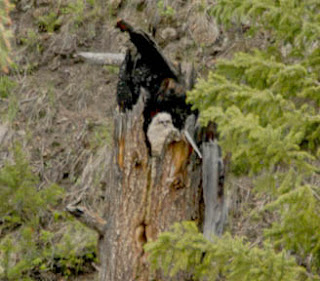 Even with my lens and extender you could barely see the chicks in the nest so I decided to get my scope out and shoot a picture through the scope. Not quite the same quality but at least you can see the eyes of one of the chicks. 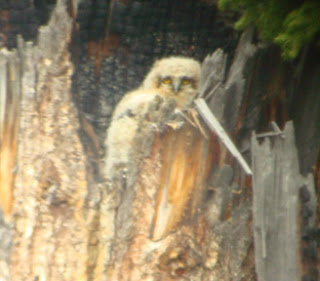 The people who I was speaking with told me that there was another great horned nest that was closer and easier to view up in Mammoth by the visitors center. We had heard that great horned owls had been nesting in Mammoth on our previous trips but we have never been able to find them. This year our luck was better. As I was walking in the street behind the residence buildings I spotted an adult great horned 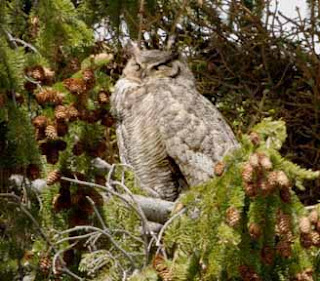 and a large chick in one of the pine trees. I took a couple of shots but the lighting was not very good. Since the only angle you could clearly see the owls was by facing west I figured that I would come back the following morning when the light would be facing the owls instead of behind them. 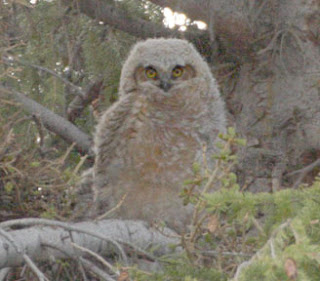 Unfortunately the next morning was overcast. When we arrived in Mammoth there was already a half dozen photographers set up and an adult was perched next to the nest. I set up my equipment and waited. Eventually we got a few peaks of sunlight so that we could get some shots. Most of the other photographers were disappointed that the owl did not open it's eyes but since I had already gotten some great owl shots at Woodlake I was not too worried about getting the eye shot. 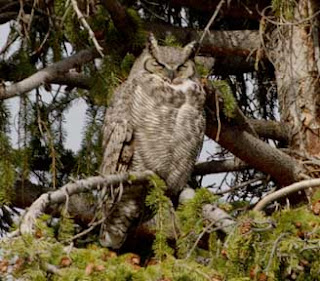 We left Yellowstone the next day and on our way back home stopped at Medicine Lake National Wildlife Refuge. We had planned the side trip to get some shots of waterfowl, particularly eared grebe in breeding plumage. As we pulled into a picnic area in the park a large form soared down from the only large tree around and landed in a small tree to the south east of where we had stopped. From the way it flew I could tell that it was an owl. I moved a bit closer and sure enough it was a great horned owl. I could not help but laugh to myself about the guys futily waiting in Yellowstone for the owl to open it's eyes and us just stumbling into a great horned with it's eyes wide open. Unfortunately the owl was to the southeast of us which put it right into the morning sun. I moved a bit to the west so that I could get better light and as I shot the picture another large form swished by over head. 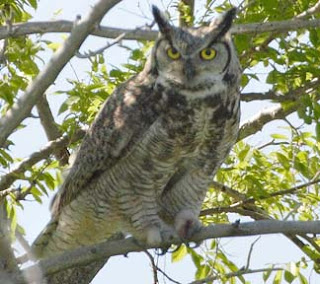 And a second great horned landed next to the first. 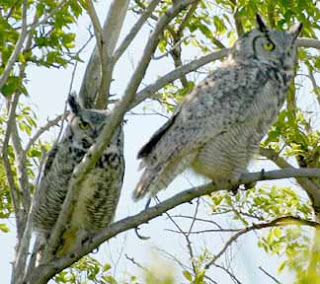 I looked over to where the second owl had just took off from and noticed that they had a nest in a tree that was just a little higher then eye level. Peaking out of the nest I spied an owl chick. 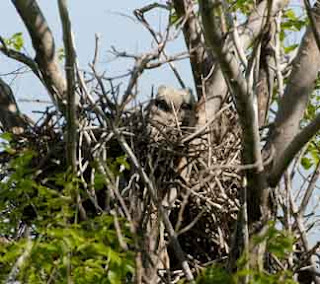 Here is a close up of the chick 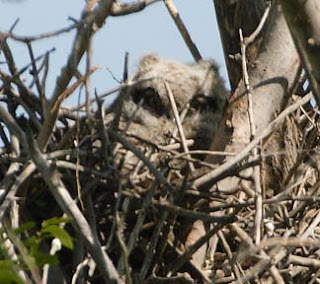 I took a couple pictures of the chick and the adults and then one of the owls began to click it's bill. I knew that I was causing the bird stress so it was time to go. We left the owls alone and went to the other part of the refuge to shoot picture of the waterfowl.

Now that we know what to look for I am hoping that we see great horned owls much more often.

Posted by Ecobirder at 4:26 PM