One of the big threats to dragonfly and damselfly comes from the turtles that live in the shallow waters of Wood Lake. 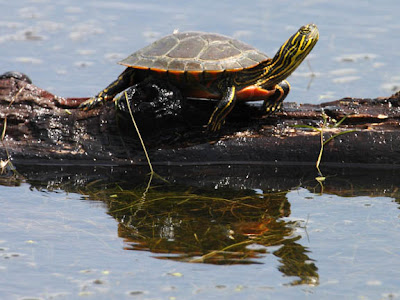 Fossil records indicate that the earliest know turtles existed around 215 million years, making turtles one of the oldest existing species on earth. Today there are about 300 different species of turtles in the world and they range in size from the spekled padloper tortoise, 3 inches long and weighing 5 oz, to the leatherback sea turtle, 80 inches long and weighing 2000lbs. 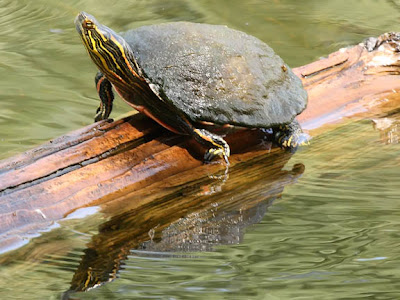 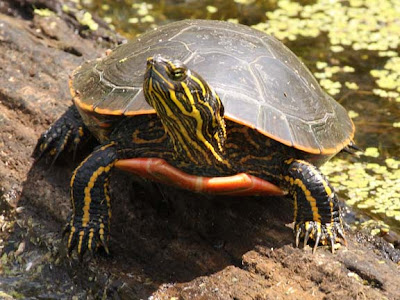 The painted turtle, sometimes called a "mud Turtle" in my neck of the woods, is named for the bright colored pattern on the belly, otherwise called a plastron, of the turtle. They are semi-aquatic, spending most of their time in the waters of ponds, lakes, or slow moving rivers with muddy bottoms, although they can frequently be seen sitting on floating logs or rocks in the sun. This behavior is called basking and it is a way for the turtles to generate heat because they are cold blooded and can not regulate their own body temperatures internally. Turtles are omnivores and will eat almost anything that they can get into their mouths. This includes insects like our friends the dragonflies.
Posted by Ecobirder at 4:12 PM

I've seen more Blanding's turtles this year than all my previous years combined.

Say, can I get some ID help? Two birds:

I'm leaning toward a first year yellow rumped for the lighter one.

We get painted turtles here too. I love to find them basking in the sun on a log at one of our many local wetlands. I guess we also get Western Pond turtles. Not as many species as Minnesota though. (and yes, there are many cloudy days here, with rain, but its very green!)

The Painted Turtles are pretty, and we just have to put up with them eating the Dragonflies. I once saw a snake eat a Hummingbird, it is just the cycle of it all.

Hi Jeff, turtles are nice :). Re-garding my brothers' database; he
has several 3-ring notebooks
filled with data he has gleaned
from academic and private collections all over the state,
not to mention 4-H collections at
the state fair.He has spent over
2 decades accumulating data that
he plans to publish some day as a
complete butterfly guide to the
state. As a volunteer curator of
insects at the Science Museum of
MN,he has added much to the base
knowledge of certain groups of
insects. Re. your Giant Swallow-
tail, he says there are vouchers
for 13 counties in MN, and sight
records (which can be reliable
but are considered hypothetical)
for several other counties. If
I can be of more help, let me
know, and I will see what I can
do for you.
Hap in New Hope

Thanks for the turtle info. My 9-yr. old grandson is fascinated by them & I'm passing it on to him via my blog -- I know many others like them too.

Enjoyed the turtle photos - I love seeing them bask in the sun on logs when I pass by in my kayak.

Wow, I will need to take more pictures of turtles, from all of the comments they seem to be pretty popular.

John I think that you are right on the first one but I am not sure on the second one.

NWNN, we may have several species but mostly I just see painted and snapping.

Leedra, did you get a pic? Although some people may think that it is morbib it is moments of natural behavior like feeding on prey that I think make the best pics.

Wow Hap, you have quite the resource there. I spotted the giant swallowtail along with an even more rare in Minnesota, at least according to the info that I have read, russet-tipped clubtail dragonfly at Carpenter Nature Center in Washington County.

Nice to see you visiting Ivar, I hope that your grandson enjoys the pics.

Thanks Shelly, one of these days I want to go and try some canoeing up in the Boundry Waters but I will need to go with someone more experienced. Plus there are the issues of keeping my camera dry and my insulin cold.

hey i have the same turtle but it is very young and when i touch it ,it scares me and when i try to pick it up it also scares me and it falls but in the lettle tank thats portable and if u have time can u give me information please bye thx for the info XOXOXOXOXO

I have just been giving two painted turtles, I now how to set a tank up for semi aquatic snakes, is it the same...the biggest one is about 8"'s and the other about half the size. What I nned to know is what is the best tank set up for these the turtles...thanks Jae