Well I am finally almost finished with pictures that I took in June. Since August is almost over that means that I am only about 2 months behind. I am fortunate though, to be so far behind, because that means that it has been a great summer. I have spent a lot of quality time outside photographing nature. Four months from now I will be happy to be photographing anything that is not snow or ice. So here are some more dragons that I photographed at Wood Lake Nature Center the last weekend in June. 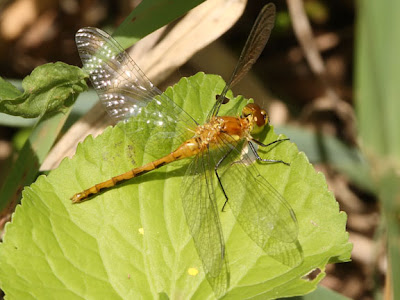 This first picture is of a female meadowhawk. I am not sure specifically which kind. At the dragonfly workshop that I attended last weekend, we talked a little bit about identifying meadowhawks. There are a couple of types that can be identified by field markings, like the whiteface and the autumn, however most of the others can only be identified if you have them in hand and are looking at them through a magnifying lens. Even then only the males are usually identifiable this way. So its best just to identify females as meadowhawks and leave it at that. 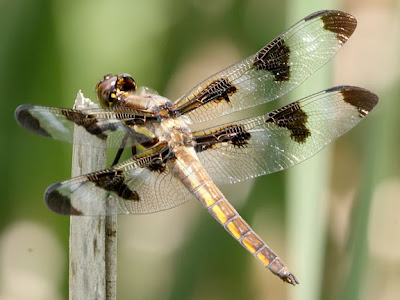 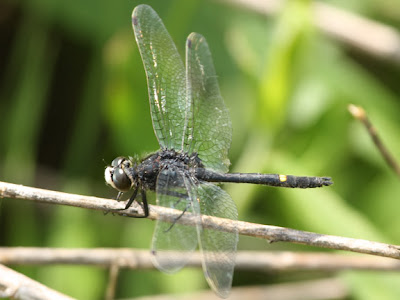 The dot-tailed white face is one of the earliest dragons that we see in the year. They usually begin to fly in May. 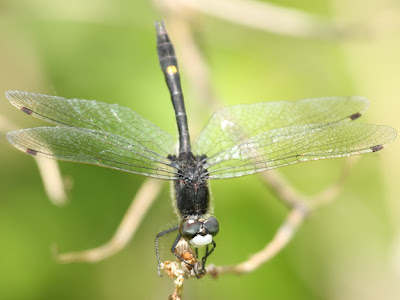 This picture demonstrates pretty well where the dot-tailed whiteface got its name. This is much more obvious on the males, like the one above, then the females, who typically have more then a single spot on the top of their abdomen. 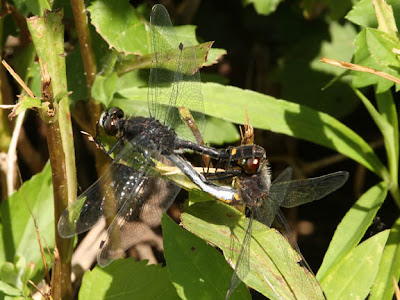 It is a little difficult to see all the differences between male and female in this shot of a pair in the wheel mating formation but you can still tell that they do look different. 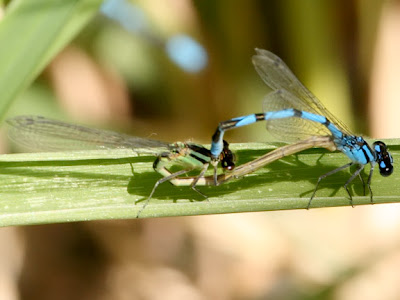 Damselflies also mate in the wheel formation. They are even more difficult to distinguish the type, with out close examination with a magnifying lens, then dragons are. Since I did not want to disturb their reproduction I will just ID them as damselflies.
Posted by Ecobirder at 3:54 PM

The blue is so pretty. We are all behind on our photos, but come winter we will be glad, when we still have something to post.

Do you have a favorite book for ID? I picked up the Stokes book this summer and have found it to be really helpful.

Thanks Leedra. I actually have so many that I have been setting some behind for when I have the winter duldrums.

NWNN, the stokes book is a very basic beginners book. Unfortunately many dragonfly books only cover dragons in a regional area. I use Dragonflies of the North Woods as my main field guide but it would prrobably not be too helpful for the NorthWest. Dragonflies Through Binoculars, covers most of the 350 species or so found in North America but it is not organized very well with pictures and text not together. SO the best bet is if you can find a regional guid and if not try the Dragonflies Through Binoculars.