One of the larger mammals that live in Yellowstone National Park that are sometimes hard to find are the big horn sheep. Big horned sheep are named for the large horns that adorn the heads of the males, rams, that can weigh as much as 30 pounds. Females, like the one below, also have horns but they are much smaller. 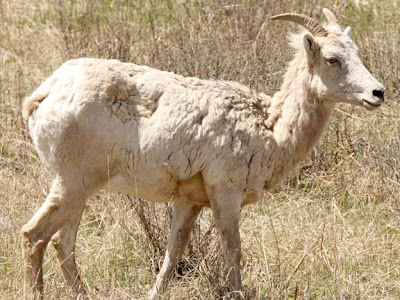 The original bighorn sheep probably came from Siberia and crossed into North America over the Bering Strait. Until the late 1800s their population numbered in the millions and they could be found through out much of Alaska, Canada, the western United States and down into Mexico. By the early 1900s hunting and diseases that spread from domesticated sheep decimated the bighorn population until there were only a few hundred left in the lower United States. Some subspecies, like the Audubon's Bighorn which were found in the Black Hills Region of North and South Dakota, went extinct while the populations of other subspecies increased. Today there are three subspecies of big horned sheep that can still be found in North America, Rocky Mountain Bighorn, which are the type found in Yellowstone, Desert Bighorn and Sierra Nevada Bighorn, which are an endangered subspecies found in the Sierra Nevada Mountains. 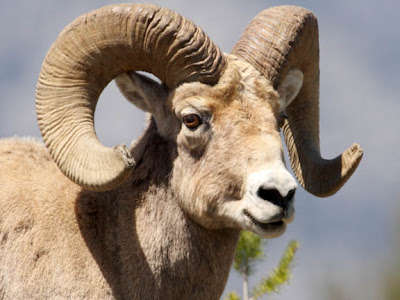 Bighorn sheep live in social groups. Throughout most of the year the ewes stay together in one herd while the rams form small bachelor herds. The few lambs that are born each year, typically in May or June, stay with the ewe herd. The females protect the lambs from predators like wolves, eagles and coyotes. Most of the summer is spent in the high country grazing on grasses and shrubs. In Yellowstone the bighorns occasionally come down to drink from the rivers this is the best time to get to see them up close and personal. In the fall the males begin to spar, butting their heads together to prove their dominance prior to the breeding season. The broken, or broomed tips, of their horns are evidence of these epic battles. Males and females gather together in the fall for the rut with dominant males guarding their harem of females. During the winter the herds move to lower pastures where the snow is not as deep, making it easier to find food. 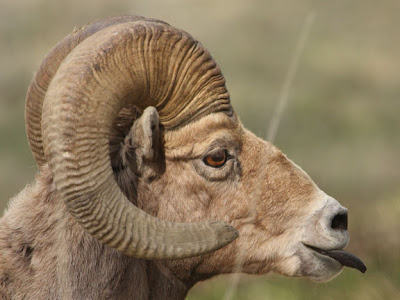 Not all bighorn sheep are social though this one became very antisocial when I tried to take his picture.

Posted by Ecobirder at 4:20 PM

The two last portraits are very impressive and beautifully composed. Well done, it is a beautiful observation.

I enjoyed your Bighorn SHeep photos, they are the one animal I missed seeing in Yellowstone.

Magnificent photos, and thank you for the history and information!
I love the last one, that is too funny!

Excellent photos! I especially liked the last two. I really enjoyed all the information, too. thanks.

I didn't appreciate having a tounge stuck out at me ;)

I love the photos and the story is very informative. The last photo (and your comment) is priceless though!