Each year I try and spend some time up around Lake Superior during the fall and early winter. There is usually a lot to look at around this time of the year, fall colors, migrating raptors and warblers and usually some interesting birds out on the lake. Some of these waterfowl are just stopping to rest and feed on their way south while others will be spending their winter here. 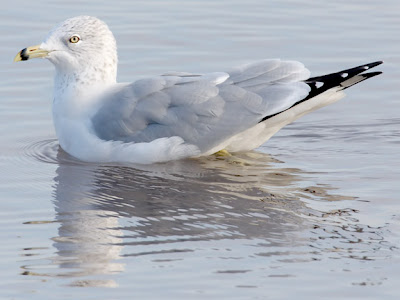 As the edges of the lake begin to freeze many birders up around Duluth spend a good deal of time scanning the large groups of gulls that winter there, looking for some of the more rare visitors. Herring and ring-billed gulls, like the one above, make up the bulk of the wintering gulls but if you are lucking you might find a Bonaparte's, Franklin's, Thayer's or something even more rare mixed in. 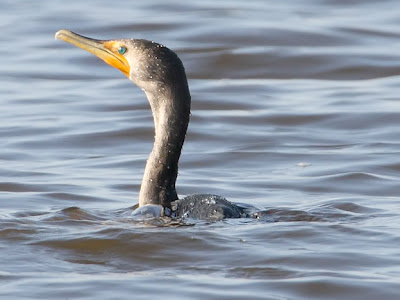 You might spot a double-crested cormorant on one of those warm fall days in late September but it is most likely just stopping by on its way south, or it has spent the summer there and has not yet left. Cormorants spend the winter in coastal waters, mainly in the south. 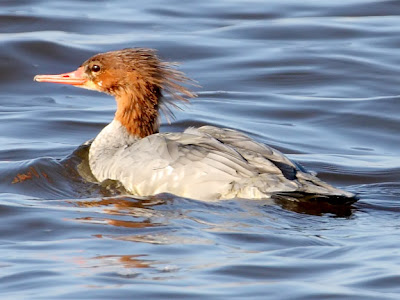 Common mergansers are pretty common on much of the open water in Minnesota during the winter. They might stay up on Lake Superior near where the ice forms around the shore or they might move south to the parts of the Mississippi and Minnesota Rivers that do not freeze up during the winter.

Posted by Ecobirder at 2:30 PM

Your bird photos are second to none. Excellent!

Wonderful pic's of the Gull, Cormorant and Merganser. Thanks for sharing.

I love the lighting on these. Perfect!

I love how the water looks like liquid silver. Very interesting birds. Thanks for sharing these. I enjoyed them!