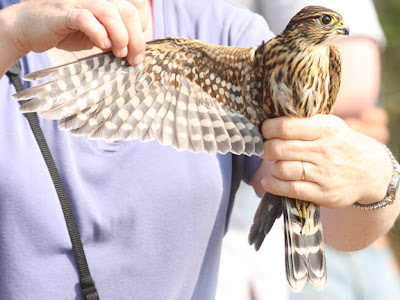 This weekend was Hawk Weekend, which is the big celebration up at Hawk Ridge. So I spent most of my time volunteering up at the ridge or driving to and from Duluth. All in all it was almost 24 hours between the two days which made for a long, but very fun weekend. 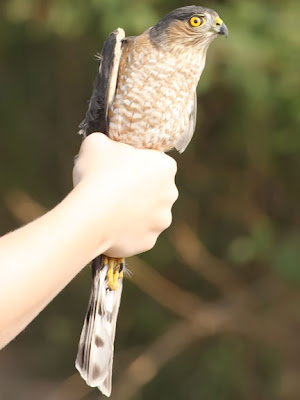 Both days started out foggy in the morning but cleared up and got sunny and warm as the days progressed. I decided not to bring my big glass with because it gets heavy carrying it around all day and besides it can get in way when I am volunteering so I just carried around the 100 to 400 both days. So with out the big glass I did not do much in the way of flight shots so it was a good thing that the banding stations where hopping both days. We had 30 adopted birds on Saturday and 35 on Sunday, which is good because the adoptions are the main way that the HRBO pays for all of the programs. Most of the adopted birds where either merlin falcons, like the one in the first pic, or sharp-shinned hawks like the one above. 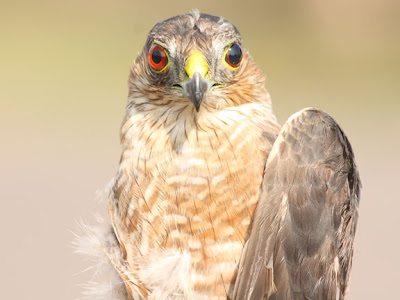 Once in a while we did get something different from the banding stations, like this mature sharp-shinned hawk that had a very unique eye. If you look carefully you notice that both eyes do not look the same. The right eye is the way that mature sharp-shinned hawk eyes are supposed to look. The left eye appears to have an extra large pupil. The bird was checked and it seemed to be able to see out of the eye so it was banded and released. 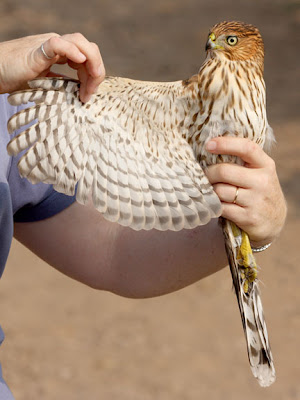 Another interesting bird was a coopers hawk. Coopers hawks are also accipiters, like sharp-shinned hawks only larger. Coopers hawks are not uncommon in Minnesota, we have a population that is healthy down in the Twin Cities, but Duluth is at the northern portion of their range so they are not as common up at hawk ridge, only 33 have been counted so far this season compared to 4212 sharp-shinned hawks. We did have a coop banded and adopted each day this weekend. 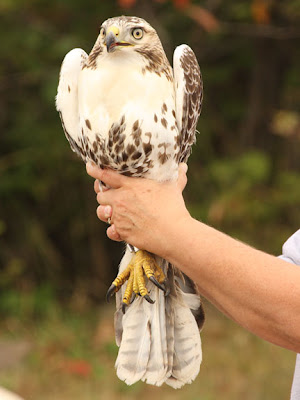 Red-tailed hawks are very common in Minnesota, as well as most of North America, but they don't usually begin migrating past Hawk Ridge until later in the season. However it is common for immature birds to begin migrating before the adults so we have counted a couple hundred of them so far this season. This was the first one that has been banded when I have been around so far this year. 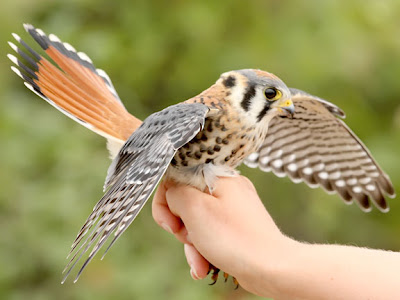 We did see a number of American kestrels fly by this weekend also. Kestrels used to be much more common but their numbers appear to be on the decline, at least in my area. The numbers of kestrels counted each season up at Hawk Ridge has been decreasing and the number of kestrels admitted to The Raptor Center has also been decreasing. That is why the counting and banding work that is done by the Hawk Ridge Bird Observatory is so important. The statistical data that they have collected can let us identify trends, like the one that we are currently seeing with the kestrels, and then look for reasons and solutions before all of the kestrels are gone. 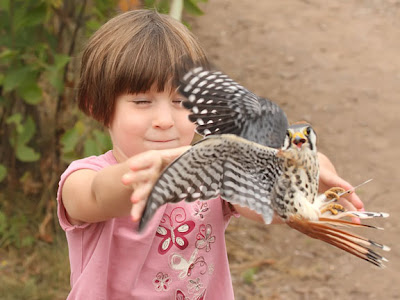 That is why the Membership and Adopt a Raptor programs at Hawk Ridge are so vital because with out the funds the important research that is being done up at Hawk Ridge may end and then where will we be? Besides where else can you have a precious memory like the one above!

Great post, beautiful shots, beautiful birds and yes, the last one is definitely a keeper!

Great shots, Jeff! Let me know if you find out anything about that shin's eye. It was completely alert and oriented...very interesting!

that is a flightful of lovely birds!

Always amazed that such violent birds can be so pliable when held. Beauiful and deadly.

Your pictures are beautiful! Such crisp clarity and fabulous compositions. I am totally enthralled by hawks and falcons, but we have so few here in the suburbia of my home. I guess I will have to keep coming back to see them thru your lens!