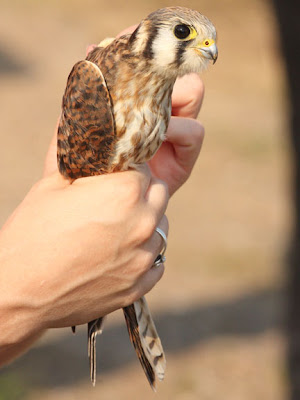 Yesterday I did my first volunteer shift up at Hawk Ridge up in Duluth, MN. Since it is about a two and a half hour drive for me to get there I took an afternoon shift which ran from noon until they shut down at 4:30. It was a beautiful day with mostly clear skies. The wind was from the south west and we had consistent sighting through out the time that I was there. 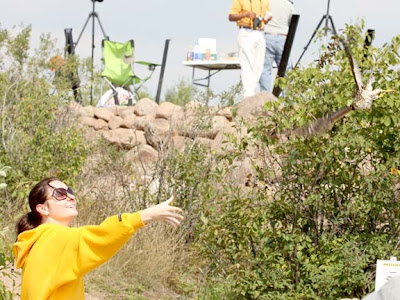 Most of the birds coming through right now are the smaller raptors like American kestrels, merlins and sharp-shinned hawks. While the counters where busy up on the ridge the banding stations were busy capturing and banding raptors as part of Hawk Ridge Bird Observatory research programs. Many of these birds were brought up to the ridge where visitors could get a close up look and learn more about these fascinating birds. Visitors then had the opportunity to adopt the birds, for a small fee that helps to fund all of the programs at Hawk Ridge, and release them back into the wild. I always love to look at the expression on the face of a visitor who has just released a bird, that expression says it all. 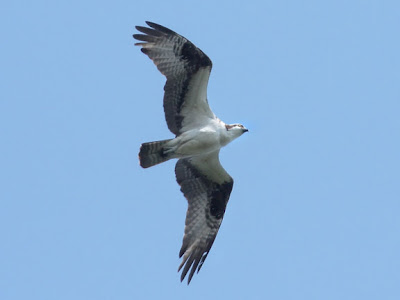 Not all the birds migrating through now were small raptors though, we did see a couple of osprey go through. Since osprey eat primarily only fish they are pretty quick to start on the journey south before the water begins to freeze up. Many osprey spend the winter down in South America so these birds still had quite a long trip ahead of them. 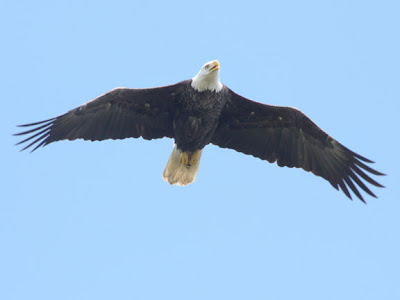 We also saw a number of bald eagles flying through. Eagles are partial migrants, meaning that they will only go as far south as they need to so that they can find food, that is why we see large groupings of eagles where ever we have open water during the winter time. The other large birds that we saw up at the ridge while I was there were turkey vultures, which are currently classified as raptors, and one red-tailed hawk. As the migration continues into October and November the number of larger raptors flying over Hawk Ridge will increase. 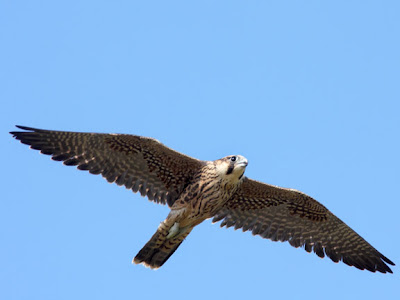 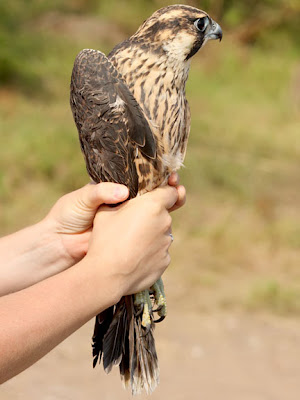 A few minutes after the peregrine passed by we heard from the counters that it had headed over near one of the banding stations. We all waited anxiously by the radio and a few minutes later the staff and volunteers exploded in excitement as we got word that they had captured the falcon. tundrius peregrines are smaller and lighter in color then the local peregrines in this area, which are typically of the anatum subspecies. tundrius peregrines do migrate through Hawk Ridge each year on their way to wintering grounds, which are along the Gulf Coast, Baha California, Central and South America, but this is very early in migration to see this type of bird. 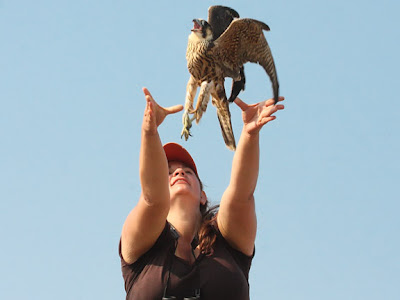 It was determined that this was an immature female who was probably on her first migration, which might explain some of the unusual behavior. I was hoping to get the opportunity to adopt the bird, and already had my money out, but there is a waiting list to adopt peregrines at Hawk Ridge, many people adopt birds over the Internet and peregrines are very popular. Since the person adopting the bird was not present to release the bird Sarah, who was the naturalist on duty on Sunday, did the honors after we let all of the visitors present get a good close up look at a bird that many people will never see in their lifetime. Next weekend is Hawk Weekend which is the big celebration weekend at Hawk Ridge. I have signed up to work several shifts and if the weather cooperates I hope to post a lot more raptor pics next week.

Posted by Ecobirder at 1:19 PM

A wonderful and wonderfully satisfying post with the faces of those releasing the birds show that they have been touched by an angel. Having picked up a Peregrine Falcon in our sunroom and released him outside, I well appreciate the feeling.

Beautiful shots, and lovely to read how thrilling this was for everyone.
Janice.

It just so happens I attended a kestrel release yesterday. It was a meaningful release in honor of a friend. That last shot is excellent!

Your post is great! I'm a bird nerd,albeit very novice and not very knowledgable. My husband and I keep a log book in the car and record all of the hawk sightings we make when we're driving around southwestern Ontario. We go to Hawk Creek in East Aurora, NY a couple of times a year.

Wonderful post about Hawk Ridge. What a wonderful place. I enjoyed all of your photos and info. Thanks!

This was such a fascinating post and I love the shots of the beautiful birds. Great work you're doing.

Beautiful birds and an interesting post. I loved seeing them being released. Helen

great post and beautiful shots! We have Peregrine Falcons down here in St. Louis, MO.

check out this blog post - by the World Bird Sanctuary about it. They good great raptor work, too
http://world-bird-sanctuary.blogspot.com/2009/09/peregrines-in-forest-park.html

Well, I have never heard of a tundrius peregrine falcon and I am not sure I would have recognized this bird as one. It would have taken me a lot of research to figure this out. What a beauty though. How fortunate you are to be involved in this activity! Thanks for the lesson! I always like to learn something new!