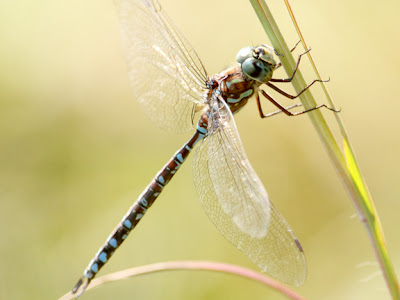 Most of the blue darner dragonflies are difficult to distinguish because they look very similar. Usually the only field marks to tell them apart are the side stripes on the thorax. Perhaps no two look as much alike as the Canada and green-striped darners. 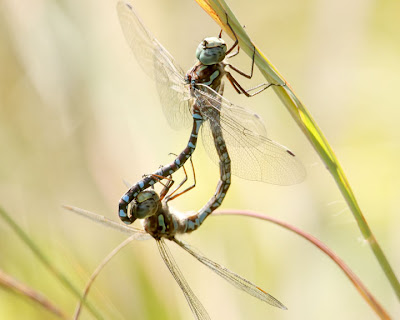 Both types of darner have a notch in their front stripe as well as a rearward extension extending back from the top. The difference between the two is the angle of the notch on the front stripe. If the notch is deep, greater then 90 degree then it is a Canada darner, if the notch is shallow, less then 90 degrees then it is a green striped. The back stripe of both types is not notched at all. You can see the notch on these is pretty deep so I would guess that these are Canada darners. I photographed them at the Carpenter Nature Center in September. The second photo is an excellent example of a wheel, which is how dragons mate. They can actually fly pretty well even when they are locked together like this. Posted by Ecobirder at 8:12 PM

So delicate, and the detail and colors are lovely.

I love dragonflies and these are really gorgeous!

Great shot! I have no idea how these insects can remain airborne locked together like this, yet alone go in the direction they wish to go! Amazing.

Beautiful photos and great drescription. I love spending time photographing dragon and damsel flies. I want a better macro lens just so I can capture them better.

That first photo makes me want to go outside and become friends with bugs. :)