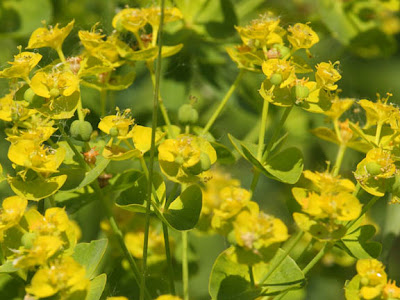 Many wildflowers that you see growing in fields are actually considered weeds. Such is the case of leafy spurge. This invasive species, which originates from southwestern Europe, usually forms dense colonies which displace indigenous species. 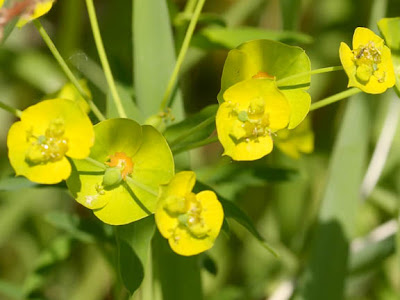 Leafy spurge is on the Minnesota list of noxious weeds. They develop an extensive creeping root system which help it to spread and make it difficult to eradicate. They are also considered toxic because they produce a milky white latex that can irritate the eyes, skin and digestive track of people as well as some animals.

They have pretty flowers though.
Happy Valentine's Day!

The plant is considered as an invasive species in Canada as well.
Leafy spurge (Euphorbia esula) is a naturalized herb that grows across southern Canada. The plant is usually not ingested by livestock, but if large amounts are incorporated in hay, poisoning can occur. Sheep are more resistant to leafy spurge, but collapse and death have occurred (Kingsbury 1964). Some humans can develop dermatitis and irritation from the latex.

It is a shame they are an invasive species. They are a pretty color.

this flower is quite unique...the flowers and the leaves have the same shape

Love that shade of yellow and green. Such an interesting flower.