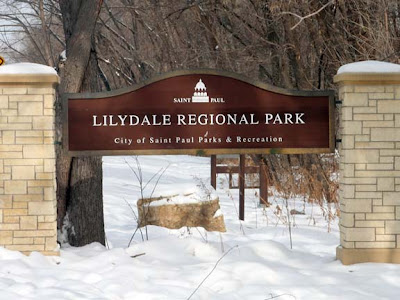 At the end of December I once again participated in the Red Wing Christmas Bird Count. This was the third year that I have birded the back roads of Redwing, MN with my friends Jim and Jim. This year though we got done with our route early and decided to head back up to the cities in search of an owl that had been spotted the week prior in the St Paul Christmas Bird Count. 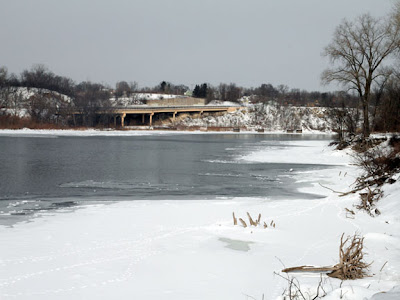 The bird had been spotted by Sharon "BirdChick" Stiteler at the Lilydale Regional Park. Lilydale is a small city park that is located adjacent to the Mississippi River in St Paul, MN. 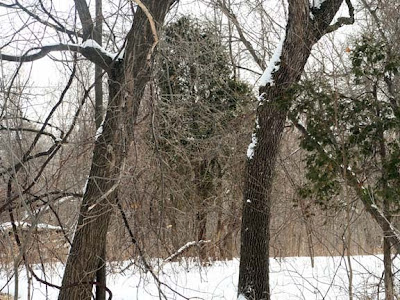 Jim Ryan lives near the park so he had contacted Sharon to get more information on the location. The owl had been hanging out in a small evergreen not far off of the road. When we arrived we found the tree pretty quick but we did not see the owl. We decided to take a closer look at the tree to see if there were any signs that the owl might still be in the area. As we made our way slowly closer to the tree a long-eared owl burst out from out of no where and flew off into the woods behind the tree. 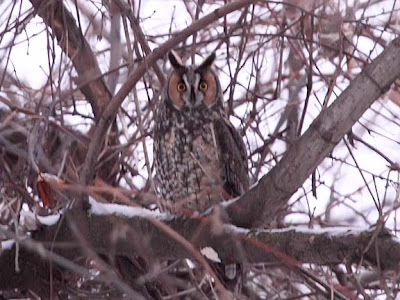 It was getting quite dark by this time and we were not sure if we would find the bird again, let alone get a pic. We decided to head down a trail that headed down into the woods in the general direction that the owl had flown. As we moved down the trail we heard the sound of passerines going crazy and we suspected that they might be mobbing the owl. A couple second later the owl appeared, it flew across the path quite a ways in front of us followed by a few small birds. Fortunately we were able to keep an eye on it well enough to now about where it landed. Jim Ryan and I moved into the woods to see if we could get a cleared view, while Jim Gay headed back up the path to see if he could see it from the road. After we had taken a few steps into the woods we located where the owl had perched on a tree surrounded by branches. It was getting very dark so I had to turn the ISO on the camera way up and as you can see it was good enough to get an identification picture. Unfortunately this was the only time I got to see this owl, shortly after this the St Paul Winter Carnival medallion was hidden in the Lilydale Park and many people seeking the medallion trampled through the woods scaring away most of the wildlife especially something as cautious as a long-eared owl.

What a great post and shots. I love the one of the owl.

How wonderful! And I love the long eared owl! I've never seen one before! Thanks so much for sharing the photos! What a great world you have!! Enjoy your week!

What a great shot - and what a thrill to see such a beautiful bird! We live more or less in the woods, and there are lots of owls. But we hear them and never see them! Happy MyWorld! Day from Louise in Italy.

The alert owl peeping out just made me laugh so much. Wonderful capture and your knowledge as always adds so much substance to the post.

good tracking story that is too bad that they flooded the woods all at once I know I love to be in the woods but we do need to realize we are in their homes:( and leave them as undisturbed as possible so we can all enjoy it.

What a great photo! And such a shame that they chose to hide the medallion in that location. Why did they do that?

Great picture. What a beautiful bird.

So much of snow and so cool. I'm just loving it...

Amazing shot of the owl! Love it!

What a delightful surprise sitting in the branches of your last photo! ;-)