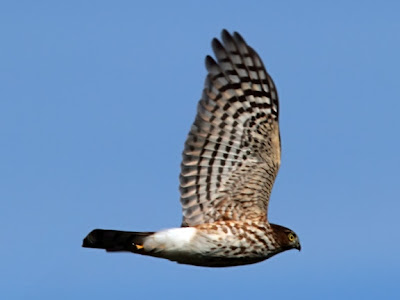 Hawks are divided into two separate genus, Buteo and Accipiter. The difference in the two genus is in their anatomy. Buteos posses an opening in the front of their coracoid shoulder bone. This opening is called a procoracoid foramen. Accipiters lack this opening. However this difference is not something that you can use to distinguish between the genus' when you are out in the field watching birds. 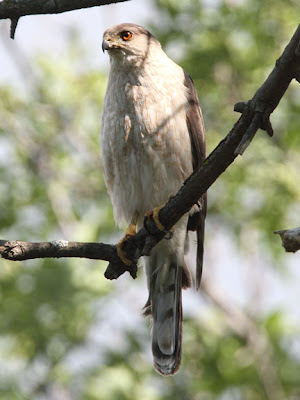 So here are some tips to help you identify Accipiters when you are out bird watching. Accipiters generally prey on other birds so they have several adaptations that help them to catch their food. First off they have short wings and a long tail which helps them to be more maneuverable. They also have long legs, which are good for sticking into bushes to catch a hiding bird, and long toes, similar to those of falcons, so that they can wrap them around a bird in mid flight. Another thing that can sometimes help ID an Accipiter is the color of their eyes. Accipiters have brightly colored eyes. They start out bright yellow when it is a first year bird, turn orange in the second year and red by the third year. This is a good way to tell the age of some of the younger birds. 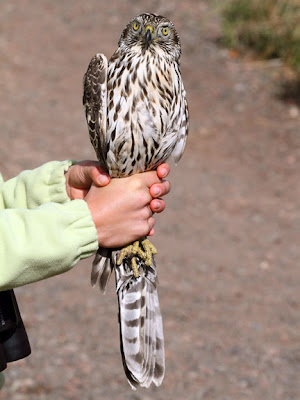 Here in Minnesota we can see three different species of Accipiters. The smallest is the sharp-shinned hawk, first picture. Sharpies are forest hunters that often ambush their prey from a hidden perch. This sharpie was photographed migrating over Hawk Ridge. The second photo is of a Cooper's hawk. Coop's are mid sized Accipiters whose population seems to be on the rise in cities where they like to hunt at bird feeders. The largest of the Accipiters that we see in Minnesota is the northern goshawk. These birds migrate down from Canada, where they breed, and spend the winter in the southern part of the state. Out of the three Accipiter species that we see this is the only one with a diet that includes a substantial amount of mammal included with birds as prey. The northern goshawk is circumpolar so they are also found in northern Europe and Asia. This one was banded and photographed at Hawk Ridge.

Posted by Ecobirder at 4:06 AM

Thanks for the interesting information, especially about the eye color. New facts to try to remember.

Learn something new every day, and this is a new one for me. Thanks.
K

I sure learned new words and info about hawk today. hmm accipiter and buteo

Visiting from ABC Wednesday and RT

Wow! I loved learning about accipeters! What a great post!

Thanks for the info. Just learned something new. I didn't know that about the eye color!

Love all your photos of birds. We get quite a few Cooper's Hawks around here.

Its beautiful! I love birds and thank you for that accipiter word that i just added to my vocabulary about birds. :) Visiting from ABC wednesday.

Ecobirder- please heed- my Ebook "The man who saw too many goshawks" can be purchased from www.smashwords.com. The Best- Nelson Briefer- www.goshawkspugetsound.blogspot.com.