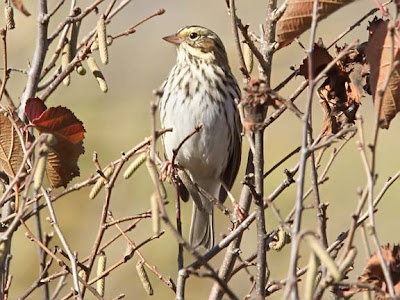 The savannah sparrow is a small passerine found in open spaces through out North America. They breed through most of Canada and the northern half of the United States. Some savanahh sparrows at the southern edge of the breeding range are year round residents while those in most of the range migrate to the southern United States, Mexico and Central America during the winter when food is not as available. 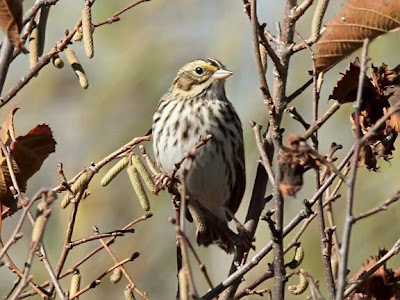 Posted by Ecobirder at 8:38 PM

Nice shots of the sparrow. Next time I am out at Plum island or Salisbury beach I will look for one! Great info!

cute little guy. thanks for your research, too. Happy critter day!

Love the name, "savannah sparrow" and love the photo as well. Your photos are always remarkably clear and distinct!

What a cutie! Thanks for sharing!

Always enjoy the information that goes along with your super photos. Very enjoyable and interesting, thanks!

I always love reading about the critters you photograph. I just don't know how you get them to always pose so nicely!

this guy is so beautifull and it all stems from an understated regalness
http://jobryantnz.wordpress.com/2012/01/15/z-is-for-zinke/

What a lovely sparrow. I checked out its range map and it is apparently common in Canada but I don't recall ever seeing a sparrow with the yellow markings of the Savannah Sparrow. I would try to keep a sharp eye out for them, but I'm having eye troubles, so I will have to depend upon my husband, my intrepid photographer, to spot one for me.