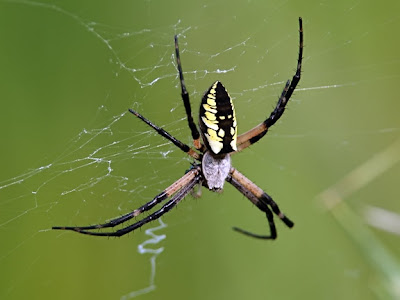 The yellow garden argiope, Argiope aurantia, is a large orb weaver spider. The body of the female argiope ranges from 19 to 28 mm long. As with many spiders the male is much smaller with a body length of only 5 to 8 mm. The yellow garden argiope is a diurnal spider, which means that they are active during the day. Each morning they construct a large web, often with a zig zag pattern, called a stabilimentum, down the middle, you can see a small example below the spider in the photo above. No one is sure what the purpose of the stabilimentum is but there are several theories including; camouflage for the spider sitting in the middle of the web, attracting insect prey by reflecting ultraviolet light, and a warning to larger creatures so that they do not accidentally destroy the web. Each night the spider will consume most of the web, digesting any tiny insects that might be stuck on the web and possibly recycling the silk so that she can rebuild the web the next morning.

Oh, I see and photograph this species all the time. They fascinate me! Thanks for the info.

I have to avert my eyes here! Spiders creep me out even though I grew up with them! These (or something similar to it) in particular since there are out in the yard and you usually don't discover them until you've walked through their web! Eeew!

Fascinating. I never realized there was such diversity in web construction.

That's taking recycling to the fullest.
What a fascinating critter. Spiders are not my favorite but this one is quite beautiful.

Wonderful paintings! This is the kind of info that are meant to be shared around the net. Shame on the {seek engines|Google} for now not positioning this put up higher! Come on over and visit my site . Thank you =)
Catalina Cylinders S30 K 30 Cubic feet Scuba Aluminum Cylinder with VX5000 Scuba Valve 3000psi