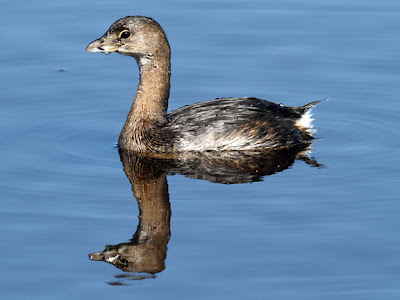 Do you know what type of bird this is? Many non-birders that I have asked have guessed that it was some type of a duck. However contrary to popular belief not all small waterfowl are ducks. This is in fact a pied-billed grebe, the most widely distributed species of grebes in North America. Grebes differ from ducks in a number of ways but probably the most obvious is their feet. Ducks have webbed feet where grebes have lobed toes that aid them in swimming. Grebes are somewhat similar to loons and in fact they were once part of the same family. However with modern testing there was enough difference between loons and grebes that grebes were given a family of their own, Podicipedidae. There are 22 different species of grebes that are separated into 6 genus. The pied-billed grebe is the only living member of the genus Podilymbus.

What a beautiful capture of the winged one, reflections and nature.

He is a cute little guy. Very interesting. I just love your photography.

What a beautiful capture. The reflection in the water is an awesome one. genie