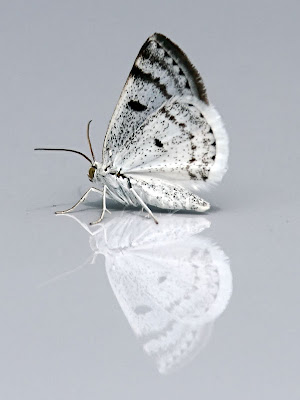 Just like the order Odonata, dragonflies and damselflies, the order Lepidoptera has 2 similar but different groups, butterflies and moths. All lepidoptera are characterized by scaled wings and body, a proboscis or straw like moth, and a complete metamorphosis. There are nearly 175,000 estimated species of Lepidoptera  and they are divided into nearly 175 families and superfamilies. There are different  theries dividing these families up into which are butterflies and which moths because the differences between butterflies and moths are not cut and dry. For instance examine the two photos in this post. Both insects lack color, which is a trait that usually indicates moths. However they are both outside during the day and perched with their wings over their backs which are indicative of butterflies. 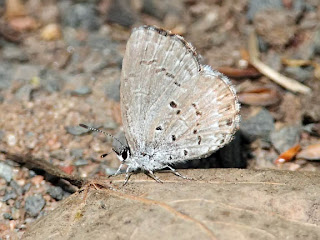 Posted by Ecobirder at 1:25 PM

First picture is vert unique : it must be art to get a butterfly to pose for you on the right support... Thanks for sharing your knowledge with us.

The first shot is excellent, with a reflection and all! Wow, what else can I say!

Trying hard to appreciate the biology lesson, really I am, but the magic of that first shot is making it hard to care!! So beautiful. I want that one to be the butterfly. ???i. Is it?

I am discovering your blog thanks to "Weekend Reflections". The photo of Lepidoptera is magnificent. It appears on first glance as a black and white photo, but it's not, is it? Superb.

Love that first photo!
And then there's Skippers too :-P

Love that photo with the reflection. Cannot imagine how you got such a shot.