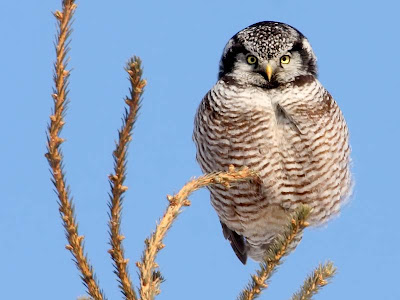 Northern Minnesota is a great place to look for northern owls during the winter. Often the population of prey species in Canada gets low or the number of new owls that are successfully hatched and raised is higher then normal and so during the winter the owls head south. Probably our most frequent visitor over the past 5 years has been the northern hawk owls. This species of owl is primarily diurnal, which means that they are active during the day which makes them easier to locate. This winter there appear to be less northern hawk owls around northern Minnesota then usual but many more boreal owls have been spotted this year.

Great photo! I think owls are so beautiful.

Gorgeous owl! Thanks for sharing.

Just recently read an interesting article on owls, who previously had not been studied thoroughly and which is now changing. The New York Times perhaps??

I have a big soft spot for owls.I love this one.

Just splendid, beautiful bird, great feather colouration, grand image. My husby just asked me the other day if I had heard of these species and I told him yes, and now I can show him your post when he awakens~

I don't usually think of raptors as cute..but this is adorable, but I bet it is a good hunter. I have yet to see any owls here, but I don't think the GHO would tolerate another species in their woods.. Michelle