Signs of winter in Minnesota

Well winter is just around the corner here in Minnesota. The butterfly and dragonfly are long gone as are the warblers and most other passerines. It seems, this week, as though the sun has left with them. The thing I dislike most about winter in Minnesota is the number of grey cloudy bleak days that we get. What we have left for birding, at least around the Twin Cities, are ducks, which are now passing through on their way south, eagles, red-tails, robins, chickadees and woodpeckers. Not a lot of variety.
Another sign that winter is coming was the opening of the eagle observation deck in Wabasha which occurred on November 3rd and 4th. I decided to go down to Wabasha, and do my first eagle run of the winter, on the 4th. It was a great day to go eagle watching. It was cool and crisp with bright blue skies. Typically the eagles gather down around the Reeds Landing and Wabasha area because the Mississippi River does not usually freeze up there. The river does not freeze in that location because the swift flowing Chippewa River, which dumps into the Mississippi just south of lake Pepin on the Wisconsin side, churns the waters. Bald eagles are not that effected by cold but do require on open water source to survive.
Since it has not gotten real cold yet, and most of the lakes and rivers still are open, many of the eagles have not yet moved into the area, however there is always a small population around to view year round.
I arrived down in Lake City, on the shores of Lake Pepin, just in time to catch the sun coming up over the lake. 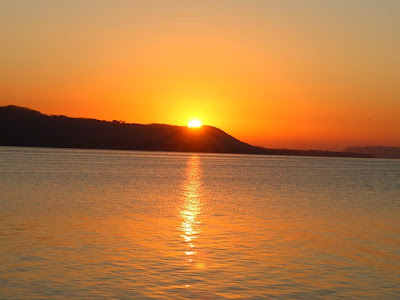 Lake City, which is about 15 miles north of Wabasha, is a great place to watch eagles until Lake Pepin freezes up. So I made my first stop at the Hok-Si-La park in Lake City. Hok-Si-La is a 252 acre park located on the shore of Lake Pepin. Most of the park is wooded with trails leading through it. There was plenty of wildlife to see including woodpeckers, nuthatches, chickadee, and black, grey and red squirrels. 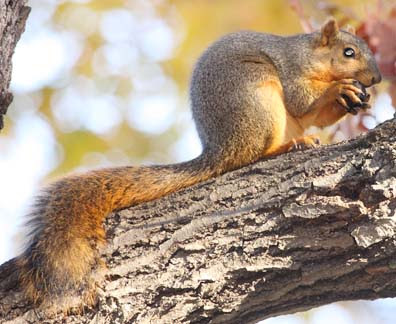 Even though I never spotted any there were plenty of signs that there are beavers living inside the park. 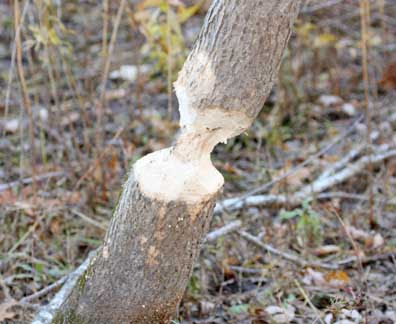 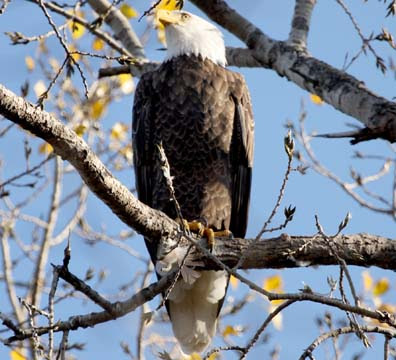 Later on while exploring the park I located an eagles nest. 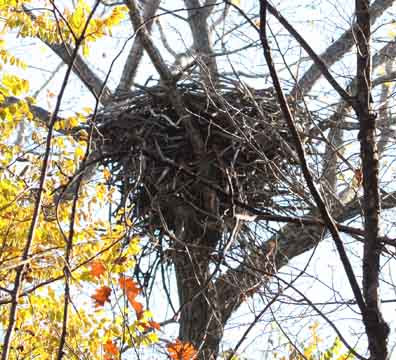 It is a little too early for eggs but I did see that there was a pair that was occupying the nest. 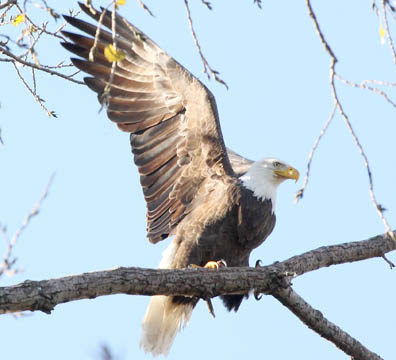 Eagles tend to mate for life. However the mating seems to be less attached to the individuals then it does the nesting territory. Eagles will mate, work on their nest, raise young and then go their separate ways. When mating season comes again the eagles will return to the mating territory. If both eagles make it back then they will mate again, if one does not make it back then the other will find a new mate.

After spending a couple hours wondering Hok-Si-La I decided to go down by the Lake City Marina where there are a few large trees that the eagles sometimes use to scan the lake. There were no eagles there yet but I did get a nice shot of a European starling. 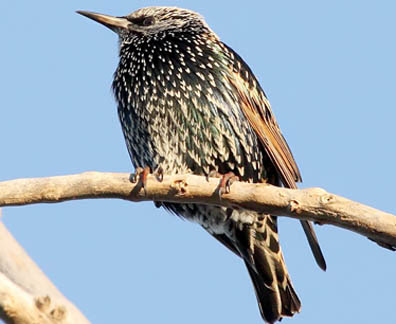 A lot of people do not like starling very much because they tend to bully other birds at feeders. I kind of like them, even though they are an introduced species. I think that they look really cool when the sun hits them right, they kind of almost shimmer. Since there were not any eagles down by the marina I decided to continue south to Wabasha. Since It was still early I decided that I would cross the river at Wabasha and head down to Alma, WI before I made a visit to the National Eagle Center. Alma is about 15 miles south on the Wisconsin side of the river and is sometimes a good place to observe swans during migration. While I was crossing over the river, which is a part of the Upper Mississippi River National Wildlife and Fish Refuge, I spotted an eagle on a snag. 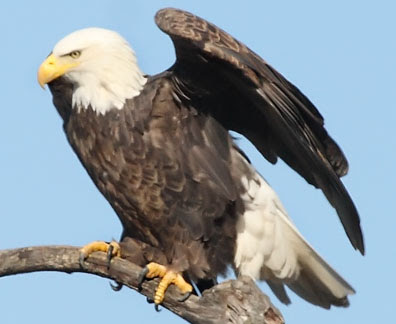 Unfortunately he did not seem to like the idea that I had stopped and he quickly took off. 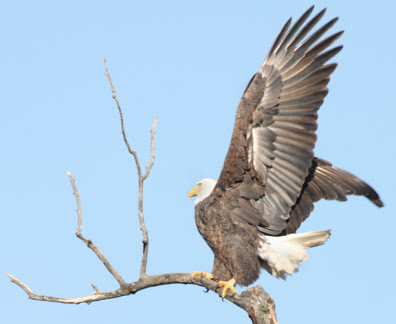 I continued on to Alma bu there was not much there except for a few ducks that where quite a ways out. I think most of the swans where further south on the river, near Brownsville, MN. So I headed back to Wabasha and visited the National Eagle Center. I sat in on another program and then went out and spent some time on the observation deck. It was getting late and I was getting hungry so I decided to start back home. On the way past Hok-Si-La I spotted a red-tailed hawk perched on the side of the road. I turned around and then pulled over on to the side of the road to see if I could locate him to get a picture. Just as I stopped the car I saw the hawk fly from its perch about 25 feet in front of me and land on a branch right above my head. 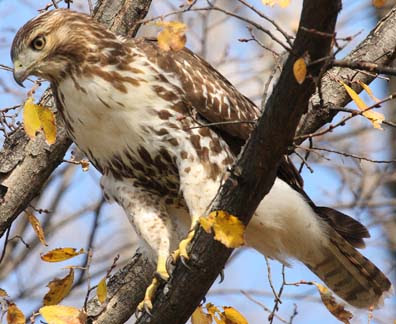 I missed the flight shot but got some good pics any way. The rest of the trip home was pretty uneventful but I could not complain because it had been a great day.
Posted by Ecobirder at 8:37 PM