Camera Critters: A New Member of the Family

Today's edition of Camera Critters is a bit late but there is a very good reason. Today Michelle and I have adapted a new little boy. 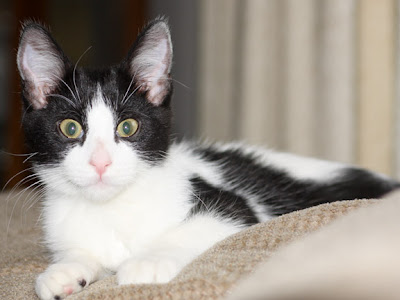 Let me introduce everyone to our new son, Magic. Magic is a 3 month old kitten that we just adopted from a rescue shelter. We know have 2 cats, Magic and Misty, both were adoptions. 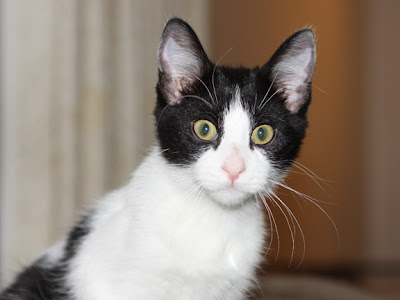 Magic has a very different personality from Misty. Misty has always been a very shy and reserved cat. When we first brought her home she spent a lot of time during her first few days with us hiding under the furniture. She has gotten used to us over the 9 months or so that she has been with us but she is still some what inhibited. Magic went exploring the moment we walked in the door. Even with Misty following him around, she is over a year old so even though she is a small cat she is much larger then Magic, and giving him an occasional territorial hiss he still was not phased. 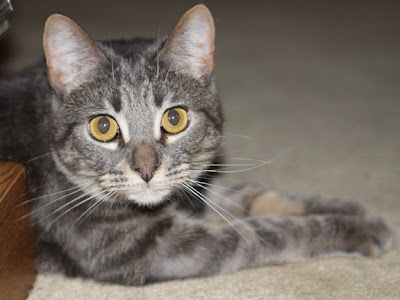 What did Misty think of the new kitten? She was a bit nervous around him but she has been getting better and even playing a bit with him. She did want to point out that she still has the most beautiful golden eyes. 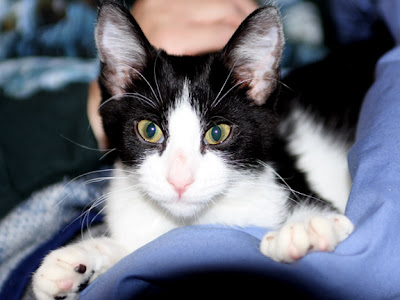 Magic has taken every thing pretty well. He has kind of ignored Misty for the most part, he was with several other kittens so the new surroundings are probably a lot more interesting then a new big sis. 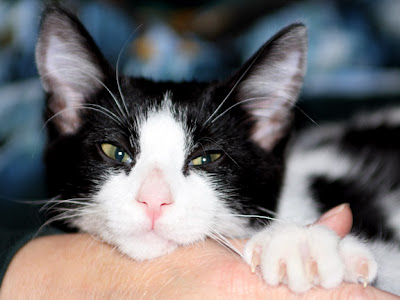 although even little kittens run out of energy sooner or later. So he cuddled on Michelle's lap to take a snooze. 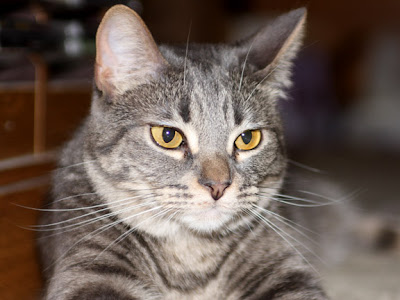 While Misty was giving her best Garfield pose. "Just wait until the humans are asleep then I will take care of the bundle of fur with eyes."

Posted by Ecobirder at 4:43 PM

What a handsome little fellow Magic is! Both kitties are beautiful and are lucky to have been adopted into such a loving home.

Awww, pretty kitties. They are both adorable, so happy Magic has found a good home. Lovely photos.

Magic is cute and pretty. The other kitty is beautiful too.

Congratulations. Your son is very handsome. I think Magic will bring Misty out of her shell more. Lisa

One can never have too many cats! Congratulations!!

Magic is very handsome. He seems to have already adjusted based upon how content he looks in the photos. Misty is cute too. I woudln't be surprised if she comes out of her shell some now that she has Magic to compete with for attention.

They are both precious...oh, have you seen the videos of simon's cat? if not look it up at you tube; I posted one on my blog a few days ago, but there are three of them and they are all great.

Hey Ecobirder, Ah, now you have a girl and a boy. They are both adorable and neutered I'm sure. Magic must be having a blast in his new home.

Misty was probably a little mistrustful in case there was a great big momma cat around to look out for Magic. The name sits well with your new friend.

Nothing is better than kitties, they are adorable

The eyes are startling. Adorable little ones.

I have nothing but sheer admiration and love for rescue adopters. Especially now with the economy skidding Sandy

Marvin my kitty said to tell you that both of your babies are beautiful and he wishes he had golden eyes like that as well!

Awww... Congrats on the silent patter of new little feet in the house. :-) He's a cutie. Both are.

Oh..love both cats...All of our cats have been rescues and this was the first pair that were actually siblings..but they still argue once in a while...I think over time, they will warm up to one another...Cute!!

Aw, Magic's a cutie! I hope the other kitties get used to him quickly.

EB: That was a surprise to see your cats. I think of you as an outdoor photographer. Those are neat photos.

Magic is Adorable!!! He looks so much like our cat Sox! Both of them are fabulous!

Wonderful photos - the cuddle one is adorable!!

You too are wonderful people for going the adoption route.

Very much like our household - one girl, one boy - both rescued... only difference, our boy is the shy one :)