Back in September I was out doing some birding up at Crex Meadows in Wisconsin. Crex is one of my favorite places around home to photograph in the warmer months. 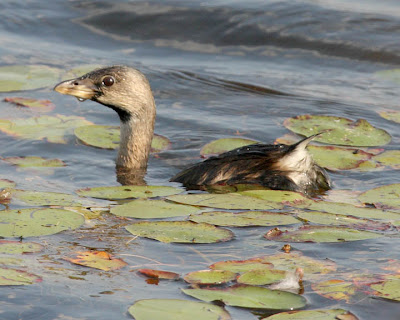 This trip was right around the time that we see an increase in the number of pied-billed grebes, as those that spend their summer up in Canada are returning to the area on their migration back south. 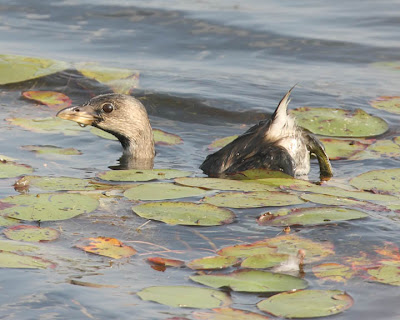 Pied-billed grebes spend the winter in the southern half of North America as well as Central America and parts of South America. 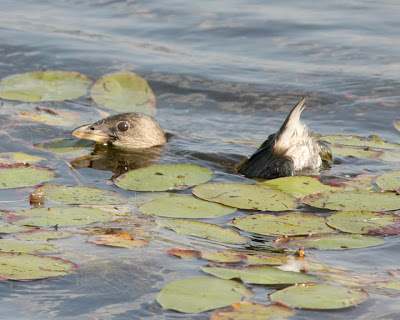 It is very uncommon to see a pied grebe in flight. During migration they fly at night time. To escape danger the pied grebe prefers to dive under the water, as demonstrated in this series of photos, instead of taking flight. 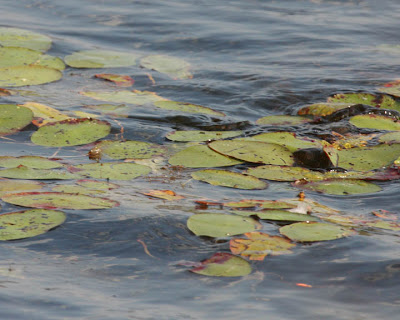 Posted by Ecobirder at 5:07 AM

You never cease to amaze me! I love visiting your blog, your photography is paralleled only by your enthusiasm for the natural world. I love it. Your grebe reminds me of a loon…the way it ‘sinks’; and I loved your Food Challenge. That peregrine is awesome...almost as awesome as your 'tracking skills'. :)

Going, going, gone. That is neat!

Adorable series of images. I've gone for a cormorant today. You do seem to have a real affinity with wildlife.

I hope you got some good photos down by Brownsville today that you're going to post (I added a link to your blog in my post since your camera and photography skills are superior to mine).

That's a neat sequence! I've never seen them do that. Isn't it wonderful how sometimes you can capture on film/sensor what you do not otherwise notice?

Last spring I found a little horned grebe had shuffled down our neighbor's deck mistaking an acrylic table for water, then shuffled to a small spot of open water on the pond. I tried to get someone from the SPCA wildlife department to help me get it because I knew it couldn't take off in that little spot. They said they would come out the next morning. The next morning there was a little pile of feathers on the ice. I was so upset at them and at me for not being able to get it..cute..just coming into breeding colors...

I like your series of Pied Billed Grebe photos in the process of diving. They look great and they tell a good story.

Happy Today's flowers. Thanks for sharing. Mine is at http://srikebakat.blogspot.com

Awesome series of the Pied-billed Grebe. When you see this in real life, it is so fast that you don't really see it, if you know what I mean. Thanks for sharing this diving series. I will attempt to catch this phenom when next I spy a Pied-billed Grebe, plus I will get to astonish my friends with my new found knowledge!