Each week over at Photofriday.com they issue a challenge. They give you a word and you need to post with that theme in mind. This weeks challenge is Black. With that in mind I give you the Black saddlebag dragonfly. 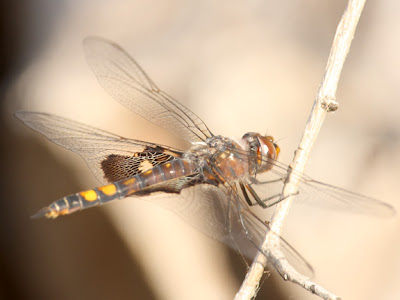 Although black saddlebags range throughout most of the United States, it is not a dragonfly that we see very often in this part of the country. That was why I was so excited when I spotted this one at the Bass Ponds near the new Cedar Avenue Bridge back on September 26th. 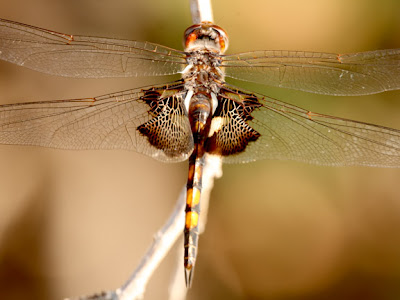 I had actually seen this dragon the day before, 9-25, while it was out hawking insects over the open fields but it disappeared before I could get any pics. When I returned on the 26th I found it flying over the fields again. 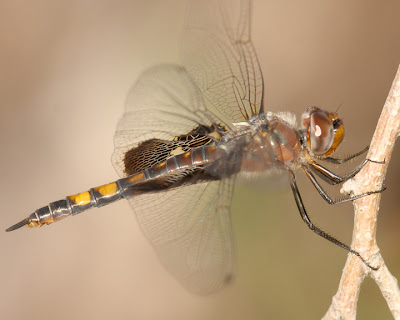 I had to watch this dragon for quite a while before I was actually able to get any pics. At one point it even disappeared over a tree but fortunately it returned and landed on a stick on a brush pile. From its lighter color I would guess that this is a female or perhaps even a young male. More then likely it stopped to hunt while it was making its way south. the black saddlebag, like many other of the larger dragonflies, does head south before it gets cold.
Posted by Ecobirder at 2:29 PM

this is a great dragonfly...but then i really love dragonflies. :)

Love dragons and what a macro job you did...

What wonderful pictures! You must have a very quiet, balanced sould for them to let you into their psace like that.

Great pictures. Guess I'm going to have to start looking at the small things in my life more closely.

Wow, that's definitely a unique one, at least to me. Wonderful shots!