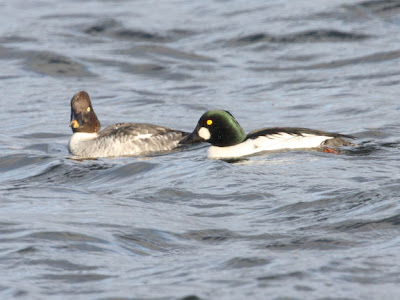 A couple of days ago the wind turned from the southeast and started to blow hard from the northwest. This was our first warning that winter is not that far away here in the north. The temps have dropped about 20 degrees since then with our high temps only reaching up into the fifties. With the changing of the season many of our local birds will begin to leave on their journey south but they will be replaced by birds from the north who will spend their winter here. 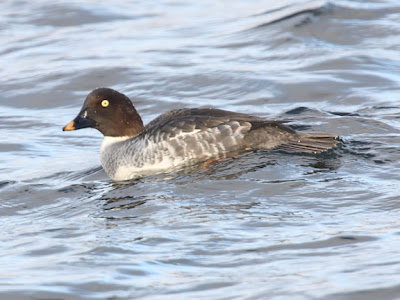 One of these birds is the common goldeneye. These birds nest from the southern edge of Canada all the way north up to the northern reaches of Canada and Alaska. They nest in cavities, such as hollow trees or nesting boxes, near wooded lakes or rivers. The females care for both the eggs, during incubation, and the chicks, who can swim and find their own food about 24 hours after they hatch. 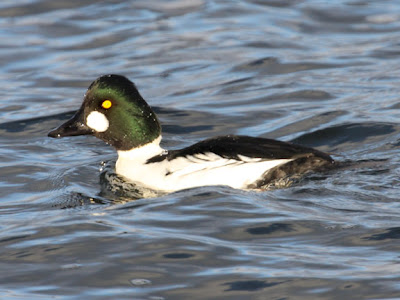 During the winter the goldeneye migrate south to protected coastal bays and waterways or open inland lakes and rivers. Here in my area we often see large flocks of them in open areas of the Mississippi River. There they can be seen diving under the water in search of crustaceans and small fish, during the warmer months they also eat a lot of aquatic insects. Often birders around here can be found scanning flocks of common goldeneye looking for a possible Barrow's goldeneye that might be mixed in. Barrow's goldeneye sightings are pretty rare in Minnesota so they tend to get a lot of attention.

Posted by Ecobirder at 3:17 PM

Beautiful shots!!
Have a great wednesday :)

I believe I've seen the golden eye in Moro Bay in winter. I need to pay more attention to when I see different species. We are fortunate in the number of birds that migrate through our area in the central valley of California.

Hi,
These are gorgeous shots. It is the reverse for us here in Iceland. The barrow's goldeneyes are the most common one. They breed in Mývatn area which has the biggest european colony of these guys. So the common goldeneye have all the attention of the birders. We usually see few of them during the spring and I think some even bred here!

Thank you for the photos of both the common and the Barrow's. We are quite a ways up the St. Joseph River from Lake Michigan, yet we have the goldeneye all winter (ice willing.) Interesting that the Barrows is more common in Iceland.

We're having colder weather too! I had to turn my car heater on this morning! I'm not ready!! These are such pretty birds! I love their golden eyes.

believe I've seen the golden eye in Moro Bay in winter. I need to pay more attention to when I see different species. We are fortunate in the number of birds that migrate through our area in the central valley of California.
Make website india