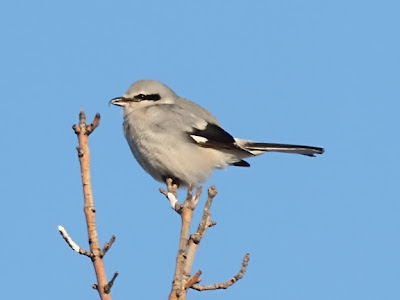 The northern shrike is a songbird that is slightly smaller then a robin. They breed up up in the Arctic Circle of Alaska and Canada. During the winter you may find them around your feeder if you live in the northern half of the United States. Unlike the other birds they are not there for the nyjer thistle, cracked corn or other type of seed. You see the northern shrike is a bird eater. They do not have the powerful talons that raptors use to catch their prey so they have to use their beaks instead. They also have been known to use tools, like barbed wire and twigs, to impale their prey. They often kill more prey then they can eat, which is how they received the scientific name Lanius excubitor, roughly translated this means butcher watchman. However the northern shrike will actually cache excess food for times when prey is scarce.

Posted by Ecobirder at 9:45 PM

I really like birds. My father was a birder and grew up living with them. A beautiful photo.

What a lovely shot!

A super photo of a bird I wouldn't want to have as a pet!
Impaling prey on barbed wire is just a bit much for the "watching" part of birdwatching.

Great capture, and I enjoyed reading your post. Very informative.