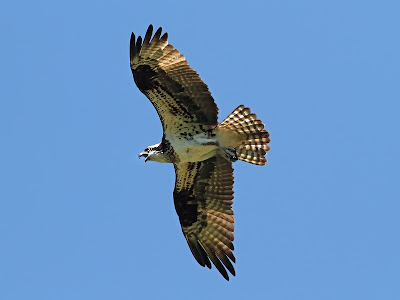 The osprey is a large and very unique raptor. They are so unique that they have a genus and family all to their self, genus Pandion and family Pandionidae. What makes them so different then other raptors? First off osprey are found on every continent of the world other then Antarctica. There are other species of raptors that can also make this claim but not many. Osprey also have toes which are all equal length. The toes on most raptors differ in size with the back toe, the hallux, usually being the largest. Osprey are also the only raptor, other then owls, that can rotate one of its toes so that it can either have three toes forward and one back or two and two. 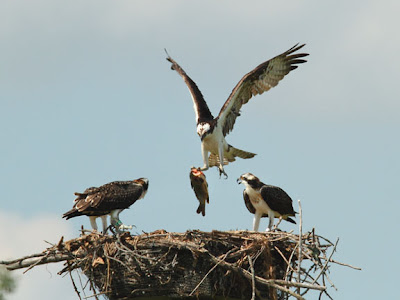 Ospreys are sometimes referred to as fishing hawks or fishing eagles. This is because about 99% of their diet comes from fish. Several adaptations help them to be very proficient at catching fish, it is reported that adults have a 50% to 80% success rate. They have pads on the bottom of their feet that are equipped with short spines that help to grab the slippery fish. Their eyes are designed to allow them to see things under the water and their nostrils have the ability to close. This is important because osprey often dive from up to 100 feet straight down into the water to chase their prey. Other times they will catch fish more like an eagle by skimming the water and dipping their feet in and grabbing the fish with their talons. Once they catch a fish they will turn it so that the head is facing forward as they fly to a perch or back to their nest to feed. This makes the fish more aerodynamic which makes it easier for the osprey to fly while carrying its load. 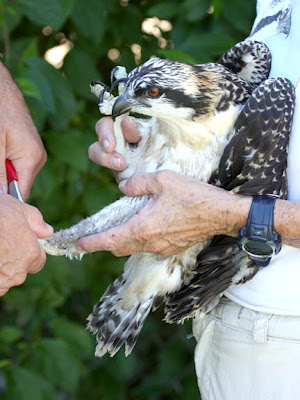 Here in Minnesota the osprey had disappeared from the southern half of the state by the middle of the last century due to hunting, habitat loss, and chemicals like DDT. In 1984 the Hennepin Parks Association, now Three River Park District, began releasing osprey back into the Twin Cities area. From 1984 to 1995 one hundred and forty four osprey were release from six different hack sites around the Twin Cities. In 1988 a pair of osprey nested in the Twin Cities, Carver Park, for the first time in many years. Since that time many osprey have nested and produced young in the area. Many nesting platforms have been added to the area to accommodate the growing population. They have also food places of their own to build nests, which includes trees, power line platforms, ball field lights, cell towers and more. Since the population in the area is not stable no new birds have been released for over 15 years, however many of the young birds are still banded each year, like the one above, by the Three Rivers Park District, MN DNR, and Minnesota Audubon Society.

Fascinating! Birds of Prey are amazing. Thanks so much
Denise ABC Team

I'm so glad that the birds have been reintroduced to the area. They are beautiful and so resourceful. Thanks for the information and great photos.

Ospreys may just be my favorite bird ~ and I don't think I've ever seen one up close and personal.

Fascinating information! Great photos too. I'm pretty sure we have them around here but I'm not too good at identifying raptors.