Reflection that Almost Was Not 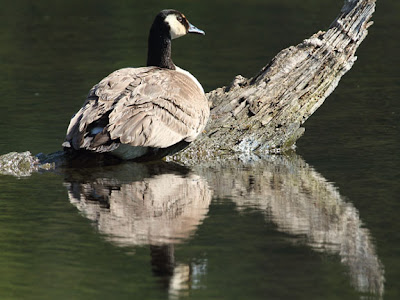 Though it is hard to believe now the Canada goose was at one time in peril. These large geese nest in Canada and the northern United States and migrate to the southern United States for the winter. Because of too much hunting and habitat loss the Canada goose populations were dwindling. Several subspecies were on the brink of extinction. Fortunately changes in hunting regulations and changes in the law helped protect the remaining population and they have since rebounded to the point where many states now have to work to control the population.

We have a lot of Canadian geese down here-in fact, I saw some today. I think some of them take up permanent residence here.

Gorgeous shot! The method of population control they are using here is setting someone to hunt the nests, and then kill most of the eggs. The adults don't lay more, and the babies are around to be oohed and aahed over.