Being a Mother is Not All Fun and Games 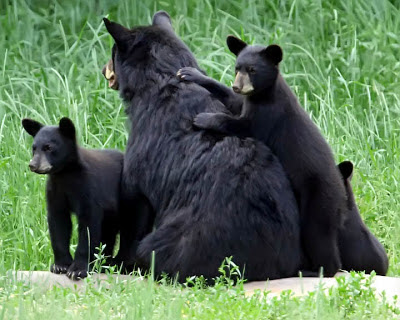 Especially if you are a bear. When you are one of the largest predators around there are not many things that will mess with you. Other then humans bears really only have one predator and that is another bear. Female black bears are considerably smaller then their male counter parts. During mating season if a male finds a female with cubs he will often attack and try to kill the cubs. If he is successful the female will go into estrus and he will have the opportunity to mate with her. But female bear do not give up lightly they will often risk their life to protect their cubs who are taught to climb a tree at the approach of an other bear.

Posted by Ecobirder at 3:03 AM

Especially when you have to feed, protect and educate three cubs. We used to have one wandering through our garden in Vermont. Not a good time to go pick a lettuce.

I can understand that. it would be a loss to have to start over for her.

So many species will kill young.... I feel empathy for all these single Moms.... Busy all the time.... Michelle