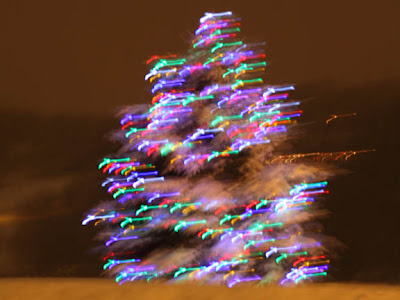 This year, here where I live in Minnesota, we had ourselves a white Christmas. A winter storm blew into town dropping snow from December 23rd through the 25th. It made traveling quite difficult but it made everything outside look kind of magical for the holidays. 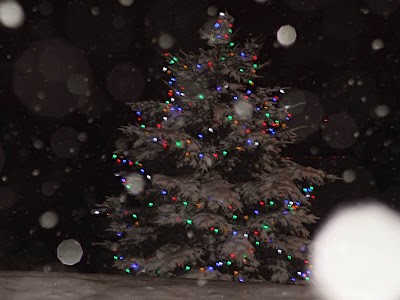 On my way home from celebrating with my wife's family on Christmas Eve I spotted this tree, which was decorated, near the side of the road. The combination of new snow and holiday lights looked cool so since I had my camera with I stopped to take a couple of pics. 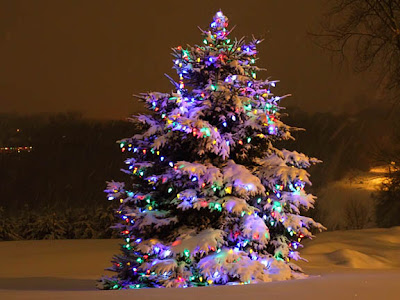 At first I tried to shoot like I normally shoot wildlife but it was so dark that the shutter seemed to hold open forever. Unfortunately standing out in the cold with the wind blowing I was not steady enough with the camera and you can see the result in the first pic above. Although that looked kind of cool I still wanted a pic of the tree so next I tried to take the shot using my flash but as you can see in the second photo the falling snow reflected back the light of the flash leaving bright spots all over the pic. Finally I shot with out the flash but turned the ISO up on the camera to 1600. The final picture is the one directly above and even though it is a little grainy it gives you an idea of how beautiful this tree was on Christmas Eve night. 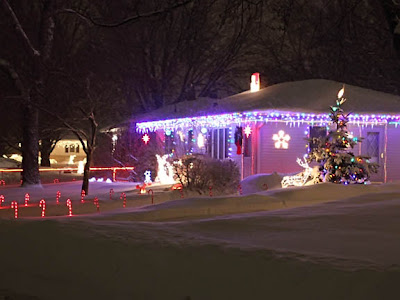 I took the lessons that I learned photographing the tree and stopped to photograph some of the holiday decorations at houses near where I live. 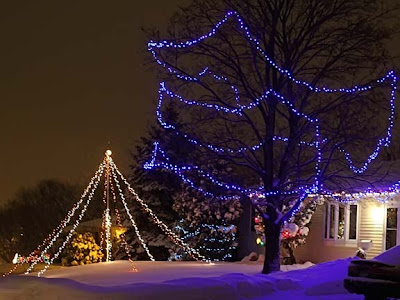 There are quite a few houses that are decorated where I live so I could have continued on for most of the night. 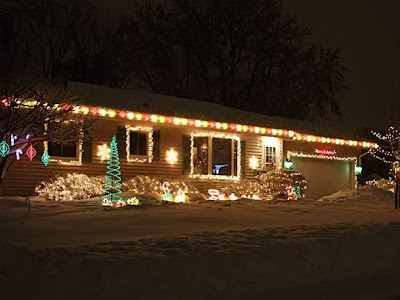 There was a lull in the storm at this time so even though it was still snowing a bit it was really not that bad out. 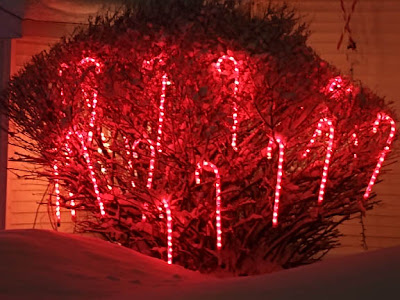 Unfortunately the holidays will be over soon and the lights will come down. It's too bad because at this time of year it gets dark here so early in the day, but with all of the holiday lights on the world seems a bit less dark and much more cheerful.

I enjoyed looking at your pictures. The tree on the side of the road was beautiful layered in snow with the lights. Helen

Gardening in a Sandbox said...

Hello: Thanks for the lesson on taking pictures in the dark. I have taken an interest in photography this year and so want to learn proper technique. I will try your ideas out for sure. Valerie

It's such a pretty tree! But actually, I like the second shot best, with the snowflakes highlighted by the flash. :)

I love them all! And what a colorful neighborhood! Such great, fun shots! Wishing you a very Happy New Year!

lovely captures of the winter lights...thanks for sharing them with us. have a great 2010.

I love that colourfull tree with the lights. Beautiful. Those houses are decorated so nicely.

Very pretty, I love the tree:)

Your neighborhood is so magical at this time of the year. Lucky you.

The snow makes everything look wonderful. Thanks for explaining how you took the photos. Capturing Christmas lights has been a mystery to me. Now I want to try your method!

Neat trick with the lights - I liked the strreaks

Wow beautiful tree and lights. Thanks for sharing.

So glad you persisted, the third pic. is sheer magic, like something out of a fairy tale.

Have a Great New Year ahead!

Very nice captured of christmas lights, too bad the holiday soon is over and all the beautiful decorations will be gone.
I also had white christmas this year :)

A very interesting series of shots and great tips that I hope to use in the future. Thanks so much.