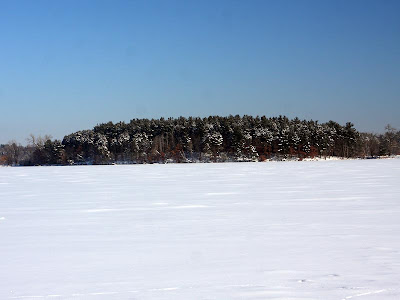 This morning I decided to head over to Lake Vadnais in search of the Townsend's solitaire that has been hanging out in the area. Lakes, rivers and other water ways are usually good areas for finding nature but Lake Vadnais seems to find more then its share of interesting visitors. 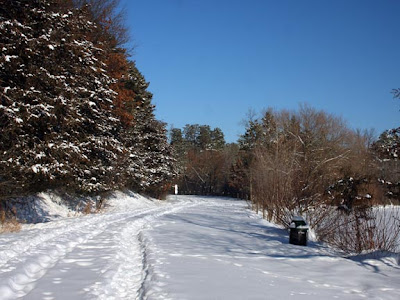 During the winter the road which runs between the lakes is cosed and not maintained except for trails for cross country skiing. The dusting of snow that we had over night, maybe another inch or two, covered the trees making them look like they were flocked. It also covered the trails making them a bit more difficult to travel, but since it was sunny and relatively warm, about 15 degrees, I did not mind much. 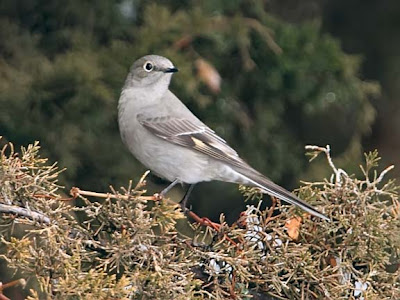 I did not find the solitaire on this trip but I did manage to photograph him back in November. The Townsend's Solitaire is a bird that is not very common here but once in a while one will hang around over the winter as long as it can find enough food. 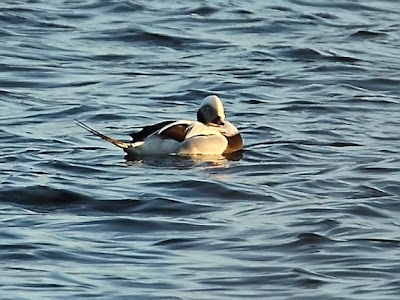 In November at around the same time that the solitaire showed up Lake Vadnais was also playing host to a male long-tailed duck. This duck was hanging out with a group of common goldeneye until the lake froze up. Since long-tailed ducks and goldeneye are both diving ducks I spent several afternoons in November watching them dive for fish. 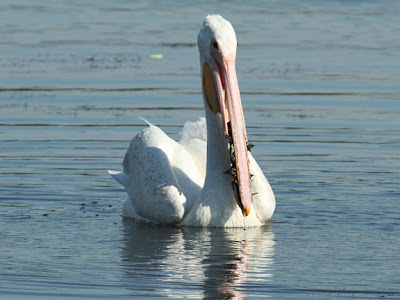 Vadnais must have had a really good year for fish because not only did we have a host of diving ducks in the fall back in July we had around 100 white pelicans that spent time on the lake. White pelicans are common in the western portions of Minnesota but usually we only see them during migration here in the Twin Cities that is why it was quite a surprise to see such a large number here in the middle of summer. It must have been the luck of Lake Vadnais.

Posted by Ecobirder at 1:54 PM

Very interesting photos. The snowy landscapes are lovely, but my favorite photo has to be the long-tailed duck. What a sweetie he is!
-- K

That pelican is gorgeous! Love the snow you have - looks a lot like here. Happy New Year.

It does look snowy and cold, but beautiful! Love the pelican! Your photos are superb as always! Hope you had a wonderful Christmas and wishing you a very Happy New Year!

Lake Vadnais is one of my daily stops when I visit MN. There's usually something interesting hanging around. It would be nice if they could plant a wider variety of trees, shrubs, vines etc to vary the food supply and bring in even more species.