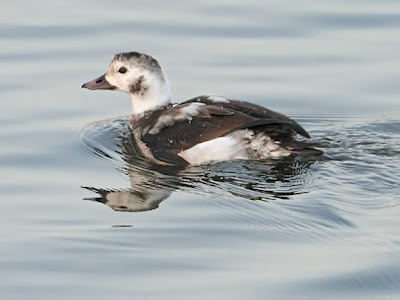 The long-tailed duck is a duck that is not very common here in Minnesota. These ducks spend the summer up on breeding territories up in the Arctic Circle and usually spend winters out on the open oceans. Last year however we had one, possibly two, that spent most of the winter on the open waters of the Mississippi River. 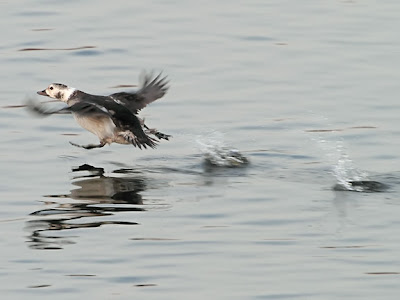 Only the male long-tailed duck has the long tail which the duck is named for, so this bird was obviously a female. Since these pictures were taken last December this duck is in its alternate plumage, which they were through out the winter. Long-tailed ducks actually have three different plumage phases and molt gradually through out the months of April through October. 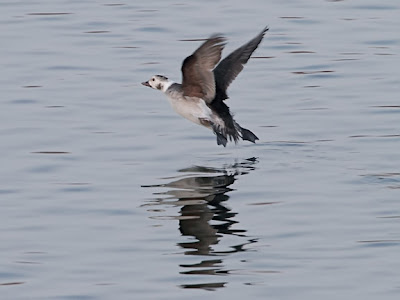 I first photographed this bird in mid December on the Mississippi River near South Saint Paul. As the weather got colder and the river froze up I believe that the duck moved to open water near Prescott, WI and further down river where a female long-tailed duck was spotted off and on through out much of the winter. This is the same location where a harlequin duck, another Arctic duck that usually spend winters on the coast, has been seen for the past three winters. Since both the long-tailed duck and the harlequin duck are both diving ducks that eat mostly aquatic invertebrates and fish it is likely that these spots on the Mississippi have a good supply of prey. At least enough to support these ducks over the winter. Earlier this year we had a male long-tailed duck on Lake Vadnais that I had the pleasure of photographing. Perhaps if we are lucky he will stick around in the area this winter.

So lovely with the reflections!!!

Great shots, and very interesting. And I would not have guessed that you have so much snow in Minnesota (I took a look at the older posts).

Gorgeous shots! The male long tailed are my favorites.

Love the reflections of the birds over the water :)