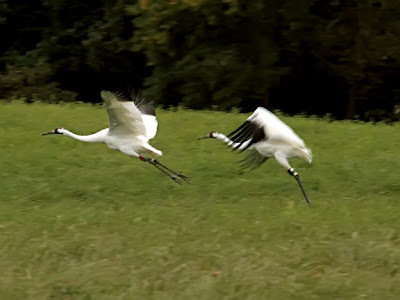 For the second time this year we have had some very special visitors in the area in which I live. A pair of endangered whooping cranes has been spotted down near Northfield, MN for the past week. I had made a couple of trips earlier this week after getting off of work but I was not able to locate the birds. So I took a half day off today and spent some time looking around and the third time was the charm. 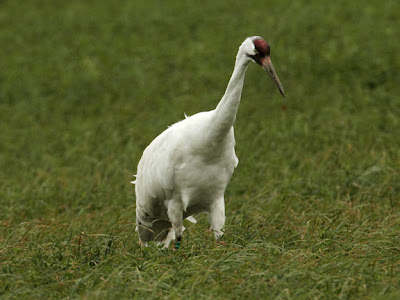 I found the pair of whoopers foraging for food in a field just a few blocks south west of where they had been seen earlier. They were accompanied by a pair of sandhill cranes. It was interesting to see the two species side by side. These were greater sandhill cranes so they are just under four feet tall but since the whooper is the tallest bird in North America they were about a half a foot taller. 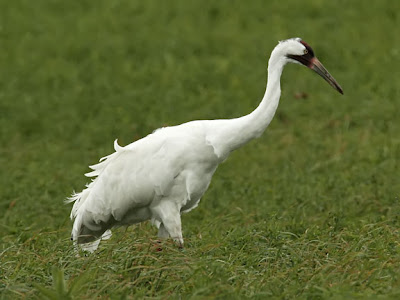 Whooping cranes are on the endangered species list. There is one naturally migrating flock of whoopers left in the world. They nest up in Canada and winter down on the Gulf Coast of Texas. In 1940 the population of this flock fell to a low of only 22 birds. Through conservation of the birds and vital habitat their numbers have increased about 4% per year until they numbered about 281 in 2010. Conservationist are worried however that if a disease or a disaster of some sort could were to hit the flock it could destroy the entire population. So in 1975 several whooper eggs from the Canada flock where transferred into the nests of sandhill cranes in Idaho. Unfortunately when the birds matured they mated with sandhill cranes instead of other whoopers. In 1999 a new group called the Whooping Crane Eastern Partnership formed with the purpose of building a secondary whooper population that would breed in Wisconsin and migrate down to Florida for the winter. You can tell that these birds are a part of that population by the bands on their legs, see the first picture. They also have a tracking device attached to their legs.

I have a friend who tracks them. She's a birder in WI close to the MN line. Love to read about these gorgeous birds. Love your photos.

every year we have a visitor - a crane in our pond, but not like yours. i hope they wont get extinct! cranes are very pretty

How wonderful to get to see them! I've always known they were endangered, but I didn't know they would mate with sandhill cranes. I wonder if there are flocks of mixed-breed cranes in Idaho to this day? Very interesting information, and your photos are super.
— K

Wow - fabulous shots! Love the action in the first one.

We had one come to Ottawa, a couple of years ago. I wasn't in town that week, though...

Such beautiful birds. I hope they can make a comeback.