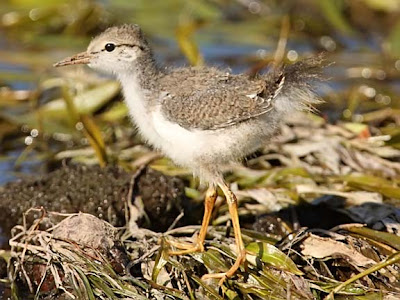 The spotted sandpiper is the most common sandpiper found in North America. During the summer breeding season they can be found along most any type of wetlands in the northern half of the continent. During the winter these birds migrate down to the gulf coast, Mexico, Central or South America. They share the genus Actitis with the common sandpiper which is found in Europe and Asia. 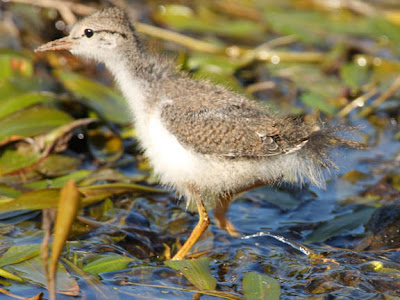 One of the most interesting thing about the spotted sandpiper is that the female is the one that arrives on the breeding range first. She then will stake out and defend a territory. With other species that is typically the males role. Following through on the whole role reversal it is the male who stays to raise the young while the female will often go off to have a family with another male. So most likely this chick was raised by its father. Since the female can store sperm for about a month it is possible that it was raised by a foster father.

Excellent and nice photos as always.

It's so delightfully fuzzy! Lovely pics.

Gorgeous chick and awesome captures. Sounds like this species has it all figured out.

Fascinating information, and great photos of this little cutie. I wouldn't leave him to be raised by someone else, father or foster father or otherwise. I'd want to watch him grow up if I were his mom.
However, the female going off to have another family elsewhere is good for the propagation of the species.

These photos are nice too.