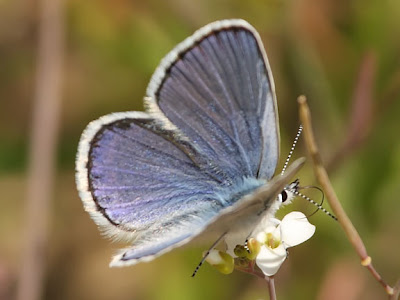 There are about 1200 species, not counting the plant species, in North America that are on the US Fish and Wildlife Service's Endangered Species List. Many people are familiar with some of the larger mammals and birds, such as bison, cougars, whooping cranes, and California condors, but did you know that there are 10 different butterfly species that are also on the list. 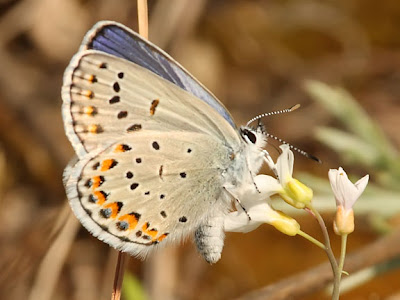 Each year I make a trip or two out to Necedah NWR in Wisconsin. One of the big reasons for the trip is to photograph the endangered Karner blue butterfly. The Karner blue is a subspecies of the Melissa blue. It was named after Karner NY where it was first discovered. The Karner was classified as a separate sub species because it has a separate range, Karners are found around the Great Lakes while the Melissa is found through out western North America, and because it has a different larval host plant. The Melissa blue larva (caterpillar) feed on plants in the pea family, such as Astragalus, Lotus, Lupinus, Glycyrrhiza and Mediccago species, while the Karner larva feeds only on wild lupine. Since it is limited to one source of food the Karner blue population is limited by the amount of wild lupine. Unfortunately the amount of lupine growing in the range has been decreasing due to land development and a lack of natural disturbance, such as fire or large mammal grazing. Natural disturbances help to eliminate many of the other plants that tend to choke out the lupine.

It's a beautiful butterfly.

Lovely little butterfly. How sad that such a pretty creature is endangered. Thanks for documenting its life story for future generations.

the Karner blue are in Albany - big fight between the conservationists and the developers over the years.
ROG, ABC Wednesday team

Such a pretty little butterfly. Love the pale blue coloration.

Wow ! what butterflies, I have never seen such species !
Gattina
ABC Team

Stunning shots! Love all of them. Blue butterflies are not seen very often in my neighborhood. Wish they were.

Stunning! Thanks for teaching us about this beautiful, delicate creature.