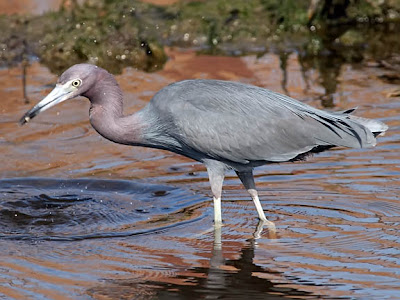 The little blue heron is a small member of the egret genus that is found in wetlands around the gulf coast, through Central America and into northern portions of South America. Most little blue herons stay with in the same range that they breed in through out the year. Although there is a small population that moves inland into the southern U.S. to breed and then moves back to the coast over the winter. 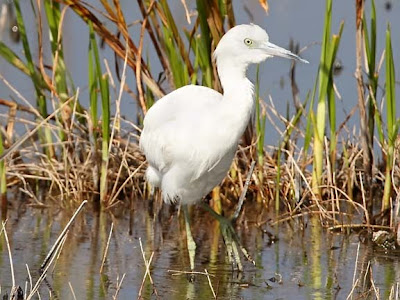 Little blue herons often live, feed and nest in colonies of mixed herons and egrets. When a young little blue heron hatches it is covered in white down. As they grow the white down feathers are replaced with a white immature plumage. The little blue will stay white for its first year of life. This helps the immature birds to mix in with flocks of great and snowy egrets which helps to provide a bit of security for the young bird against predators. These pictures where taken on South Padre Island on Gulf Coast of Texas.

Posted by Ecobirder at 8:11 PM

beautiful! have never seen one of these in person. :)

I always find your posts so interesting and your photos of these beautiful birds are a treat.

Great pictures you show of "a small heron."
Wishing you a good weekend :)
Hanne Bente

Beautiful little blue! And I learned more about the little guy! Lovely and thank you!