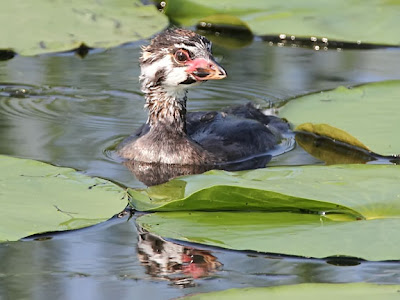 The pied-billed grebe is the most widely distributed grebe in North America. They are found through out the  continent except in the far northern reaches. In much of their range they are year round residents however in in the north east and north central they migrate south from the breeding range for the winter. Even though young pied-billed grebes often leave the nest soon after they hatch they spend most of their time on the backs of their parents. By the time that they are four weeks old they spend most of their time on the water. This is an immature bird.

Posted by Ecobirder at 4:42 AM

Where I live, pied-billed grebes are rather shy so congratulations for getting that close.

What a beautiful photo.

What a wonderful picture. It looks very young.

Oh, how I wish I was a birder-photographer. This is such an awesome picture, and the reflection is beautiful. Wonderful photography. genie

I've never seen one of these cute little birds before. Very unusual markings. Thank you for sharing at Your Sunday Best this week.

is this a cute creature! great photo!