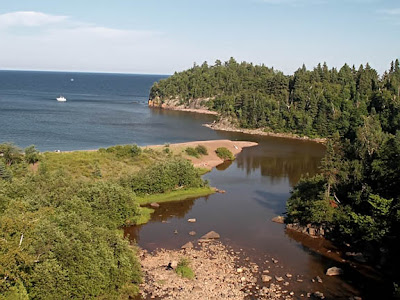 The north shore of Lake Superior is a magical place filled with gorgeous scenery. The North Shore sits on the northern edge of the North American Mid Continental Rift. Millions of years ago when the continents drifted apart the pressure ripped a rift across the middle of North America. Lava flowed out from the rift and created a crust made out of basalt. Eventually the pressure on the continent subsided and the tearing stopped. The lava cooled and was covered by sediment. Millions of years later as the glaciers came through the area, they eroded much of the basalt and sandstone leaving mostly the harder granite behind.As the glaciers retreated their run off filled the basin creating the great lakes. They also dumped much of the sediment that they carried covering the beaches with cobblestone and sand. Now the North Shore is a series of rocky granite cliffs, rocky or sandy beaches, boreal forests, and rivers running to meet the big lake.

How beautiful. I never cease to be amazed by the story of the creation of the North American continent.

The glaciers did such a good job of altering the Pleistocene landscape that it's easy to forget what was underneath! I don't normally think of that part of the country as being volcanic, so thanks for the reminder. Nice shot, too, and it looks like it was taken on a gorgeous day.