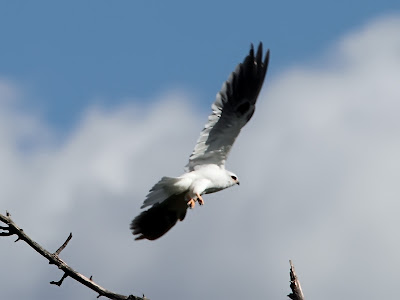 So today the weather was nice so I decided to take a half of a day off and head up to Crex Meadows in Wisconsin. Since it is mid August things were a bit slow. Except for a few warblers that I was able to pish out I was mostly just shooting butterflies. That was until I turned on to Murphys Road. As I began to drive down the road a large white bird flushed from a tree on the right side of the road. It flew north and landed in a tree on the opposite side of the road. 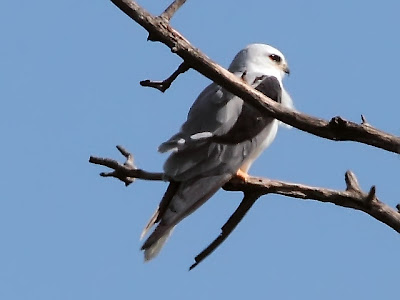 My first thought was that it was a kite but since kites are very rare in this part of the country I figured that I just did not get a very good look at it. I knew that it was not an osprey but I thought that maybe it was a male northern harrier, which are light gray with black wingtips and white underside to their wings. So I slowly moved down the road, angling the car so that I could shoot out of the open passenger window. This time I recognized that the bird was indeed a white-tailed kite. 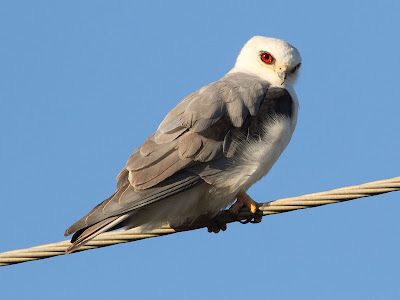 This is not the first time that I have photographed white-tailed kites, I have photographed them in California and Texas, but I had never heard of anyone spotting any in Minnesota or Wisconsin. This last photo was taken in Texas in 2010 and I included it so that you can see the field marking for these birds. When I got home I checked with the Wisconsin Society for Ornithology and found that there are only three records of white-tailed kites spotted in Wisconsin. The last record was back in September of 1989. So even though a few have been spotted over the years it has been over 20 years since anyone has reported one.

Posted by Ecobirder at 8:19 PM

A lucky day for you!

just beautiful! have never seen a kite in person (either in Wis or Tx).

p.s. i hope you reported your sighting!

A great find then - well spotted!

What a beautiful bird! GReat captures.

Great sightings -- it is amazing that you spotted these rare (for where you saw them) birds! -- the flight shots are marvelous, but I love the one where you can see his eyes, just staring at you!

Must have been very exciting to see this beautiful bird and to get such amazing shots. I have never seen a White-tailed Kite before, thanks for sharing it.