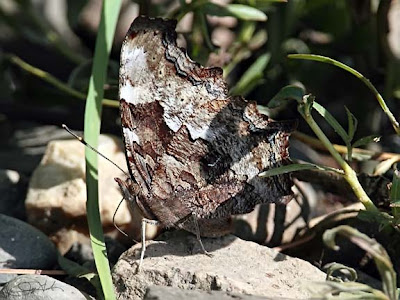 At first glance this butterfly maybe identified as one of the comma species of butterflies or a member of the Polygonia family. Comma butterflies are identified by the white "comma shaped" mark on the underside of their wings. This butterfly has a "comma" on its wing but it is actually in the Nymphalis, or tortoiseshell, family. From its underside the Compton tortoiseshell looks similar to a grey comma except that it is larger and the punctuation mark is very thin.

From the top the Compton tortoiseshell looks more similar to the eastern or green comma then it does the gray comma. The Compton has white marks on the leading edge of its wings which are similar to those on the eastern comma but it has much bolder black patches then the eastern. The green comma has bolder black patches that are similar to the Compton but it does not have the white patches on the edge of the wings. So if you combined the upper side of a green and eastern comma and a lower side of a gray and gave it steroids to grow then you would end up with something that looks a lot like a Compton tortoiseshell. Posted by Ecobirder at 8:39 PM

Beautiful. Have a fabulous week.

Another amazing shot ~ (A Creative Harbor)

It never ceases to amaze me that you actually know all kinds of information on the creatures you photograph.