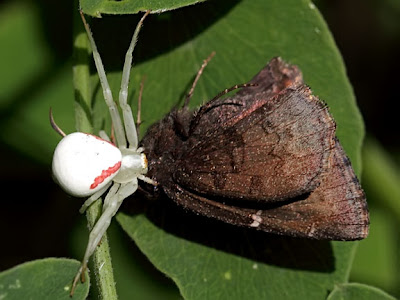 One of the new things that I have begun to photograph in the last couple of years are spiders. I find spiders extremely fascinating. Like other predators they are diverse in their prey and how they hunt. This affects the habitat where different species live. When most people think of spider they think of them spinning webs but there are many types of spiders that do very little spinning. The goldenrod crab spider is a good example of this. 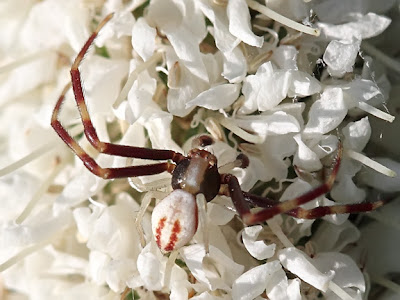 The goldenrod crab spider typically only spins webs during mating and egg laying. They hunt by ambushing their prey. The goldenrod crab has the ability to change its color between white and yellow. They change color to blend in to the flower that they are sitting on. This camouflage helps them to sneak up and ambush their prey. The prey typically consists of pollinating insects which the crab injects with venom and sucks out all of the body fluids, as in the first photo. They are often found in their yellow form on goldenrod flowers, because goldenrod attracts many insects. 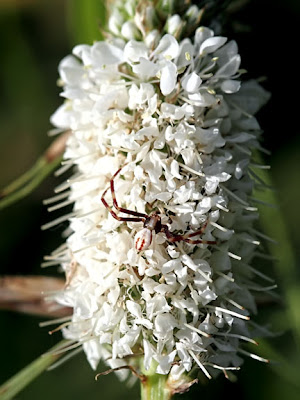 Female goldenrod crab spiders (top) are all one color, either yellow or white, except for the two red stripes that run down their abdomen. Male goldenrod crabs (second and third photo) have a dark thorax. Their front two pair of legs are also dark. The abdomen and back legs look similar to those of the female. The big difference between the sexes is size. The female spider is at least three times larger then the male. This is true of many spider species. This last shot gives you a perspective of just how small the male goldenrod crab is.

My entry is here.

I too have become interested in spiders after learning to lose my fear of them. I will have to look for these or something similar next season ... great post Jeff..thank you for adding it to Nature Notes.. Michelle

I do not love Spiders, I do not even like Spiders, and yet, I do find them fascinating and also fun to photograph. You took some really very nice images!

Hey there Victor, just completed, along with you along with
Simon using the Web seminar.
Also visit my web blog ; Treat Genital Warts

[p]UGG Gunstig Lampen und anderes Aussehen zu Ihrem Komfort dieser Schuhe und markiert den Eintritt eines Teils der Erklrung der Annherung an die Welt der Ansatz heute [url=http://www.uggbootsclearanceukonline.co.uk]ugg boots clearance uk sale[/url] zu maximieren . M o r e y o u b u y m o r e d i s c o u n t y o u w i l l g e t . It must be the dream of many to purchase a pair of bailey boots from UGG during the upcoming festive season . Although you may be keen to wear these boots straightaway allow the boots plenty of time to dry and don't think putting them in front of a heat source such as radiator or standing them in direct sunlight will help . And if you want to turn out to be advantageous at matching, you nonetheless [url=http://www.uggbootsclearanceukonline.co.uk]ugg boots clearance sale[/url] have loads of points to examine . But there were some individuals bold enough to take a try and then surprisingly found their best winter boots . First [url=http://www.cheapuggboots4sale.co.uk]ugg boots sale online[/url] together with foremost, you need to be sure of that the one that you're buying are more than sheepskin or possibly not . The initial spot [url=http://www.uggbootsclearanceukonline.co.uk]ugg boots clearance uk[/url] that you simply should turn, when seeking for a last minute vacation bargain, could be the web.[/p][p]Many properties and assets might advertised,best sheepskin [url=http://www.uggbootsuk4outlet.co.uk]ugg boots uk[/url] boots, and additionally transformed into revenue . Ugg boots are exceptionally warm and are great for cold weather (up to -30 degrees Fahrenheit) - however, they should not be worn in excessively muddy or wet conditions . Ugg boots are generally stylish about the seaside, at the local mall, on the street, in your house . As they take the money and don send the shoes or they show something else in pictures and sends something different from that . " According to Ms Syman, it is women who have embraced the physical [url=http://www.newcheapuggbootsau.co.uk]cheap ugg boots[/url] side of the practice with most fervour and in many ways they are the ones who spend the most on it . htmlhttp://wangjia711922 . So here I will tell the right way to clean your shoes . That隆炉s the reason purchasing ugg boots [url=http://www.newcheapuggbootsau.co.uk]new ugg boots[/url] on the web may well be a bit harder.[/p]