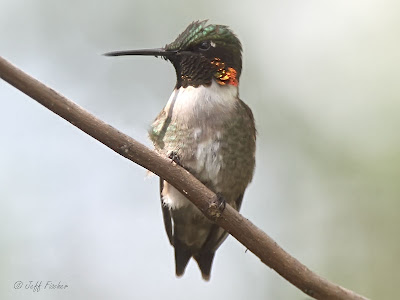 The ruby-throated humming bird is the most widely distributed hummingbird in North America. It is also the only species of hummingbird that regularly breeds in the eastern half of the continent. The breeding range of the ruby-thoated hummer covers the eastern half of the United States and south central Canada.During the winter they migrate down to Mexico and Central America. 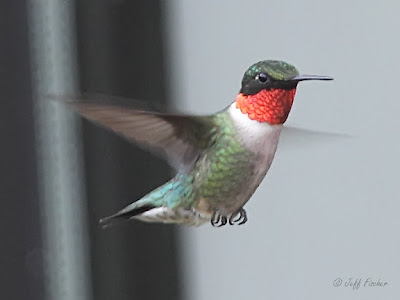 The feet of the ruby-throated are so small that they are not able to walk or hop like other birds. Instead they often hover, their wings beating around 53 beats per second. Nesting usually takes place in trees but because they are usually often found around people they will sometimes nest on man made items. They are often enticed to peoples homes by use of hummingbird feeders that are filled with sugar water.

We love to watch the ruby throated hummingbirds at the feeder. They are amazing little birds.

I love seeing photos of the hummers; something I've never seen for myself. Your first photograph is so different to the norm where I usually see them hovering over feeders. Well done; I'm sure they don't sit about like that for long. How beautiful...little charmers!

Beautiful photos of the hummingbirds.