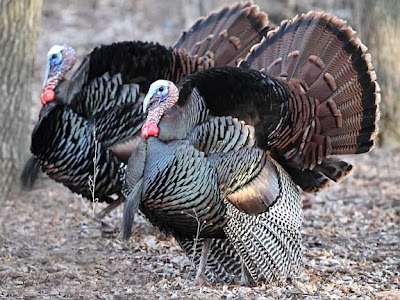 The wild turkey is a large ground dwelling bird found in North America. They are the largest member of the order Galliformes and they were an important food source of the Native Americans. Early explorers brought turkeys back to Europe where they were domesticated, one of only two domesticated species that originated in North America. The birds that were brought back to Europe were from a subspecies in Mexico that had white tips on the end of the tail feathers, instead of a tan color like these wild turkeys do. Much of the early trade with North America went through Constantinople on its way to Britain which is how they got the name turkey. Wild turkeys were wiped out in much of their range by the early 1900's because of hunting and habitat lose. In the 1940's wild turkeys were trapped and released into areas where they were no longer found. They have recovered very well over the past 70 years and they are now found in every state in the U.S. except for Alaska.
In the late 1700's Benjamin Franklin sent a letter to his sister in which he expressed his opinion on why he thought that the turkey would be a more appropriate representative of the United States. The bald eagle was chosen to be the symbol of the new nation but the turkey became a symbol of one of our most honored national holidays.

very appropriate for this week's prompt!! They are gorgeous!!

we have lots of wild turkeys wandering our neighborhood...they are amazingly plumed, when you get to study them a bit.....and your pic shows this beauty well....thanx for the info - I will impress someone tomorrow with this new knowledge...Happy Thanxgiving!

Great article! I always get an adrenaline rush when encountering turkeys in the wild. Have a Happy Thanksgiving!

I do have turkey visiting the yard which is why we don't eat them anymore for Thanksgiving. LOL. But I was not aware of all that information Paul.. thank you... Michelle

Gorgeous wild turkey image. I always feel a but bad eating turkey, even though we do not hunt them. Happy weekend you you~