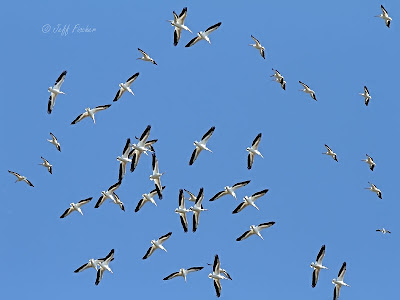 The white pelican has the second longest wingspan of any bird  in North America. The only bird with a longer wingspan is the California condor. The white pelican breed on inland lakes in the north central United States and Canada. They migrate, sometimes in large flocks, down to the coastal waters of the southern United States, Mexico and parts of Central America. While we were down in Big Cypress during our recent Florida trip several flocks of pelicans converged filling the skies above us with white and black wings.

I would have been thrilled to see these. Great shot of them!

A great capture! I like pelicans so much better than seagulls.

Beautiful blue skies and the perfect backdrop for those pelicans! Terrific capture for the day!!

Oh! So many pelicans in one shot!

I love those guys, and the way they fly in large circles, and when foraging PLUNGE into the ocean. SO cool. =) Great shot!