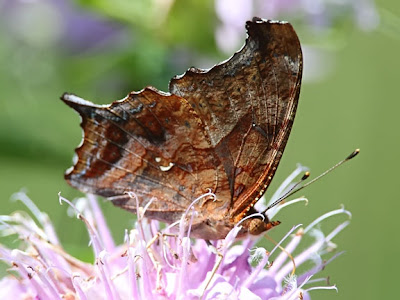 The question mark butterfly is a true brushfoot butterfly. They are a part of the Genus Polygonia which is more commonly called the comma or punctuation mark butterflies. That is because each species of the Polygonia Genus has a conspicuous white or silver mark on the underside of the hind wing that resembles a punctuation mark. The mark on the question mark butterfly is broken into two parts, an arc and a dot, which makes it appear like a question mark. Question marks are found through out the eastern United States and into northeastern Canada. They usually feed on things such as dung, rotten fruit, tree sap and carrion but will drink nectar, as in the photo above, if their usual foods are not available. They are usually seen from late May to September but may be seen earlier or later in some of the warmer portions of their range.

WHAT? That's a real creature name?!

My, their diet isn't magical like the image of beautiful butterflies.

They look well camouflaged for a woodsy environment. All about not getting consumed by something larger!

Hmmmm??? Never heard of it.

At first second it has more of a bat or a moth (in layman's eyes! Hmm, rotten fruit doesn't seem very appealing to me:)

I hope to see more butterflies next summer. We had none this summer. Your photograph is exciting for me to see.

What i don't understood is actually how you're now not actually a lot more smartly-liked than you may be
now. You're so intelligent. You know thus significantly in relation to this matter, produced me for my part believe it from numerous varied angles. Its like men and women aren't fascinated except it's something to accomplish with Lady gaga! Your personal stuffs outstanding. All the time handle it up!
Feel free to visit my webpage : losing weight