Wednesday I returned to Lake Hiawatha to see if I could get some better pictures of the immature yellow-crowned night heron that has been hanging around there. The pictures that I got on Sunday were good but I was hoping that I would find the bird a little closer and in a bit better light. I went out straight from work and got to the lake around 2:30pm. I looked around a bit but did not see it. I did run into another birder, Bob, who was trying to add the bird to his Minnesota list for 2007. Since I had already been searching for the bird earlier in the week I filled Bob in on my experience. We looked around a bit and found several of the immature black-crowned night heron. We kept moving around on the south side of Minnehaha creek changing our angle in hopes that we would spot the yellow-crown. Then Bob spotted a bird through the trees that he thought might be the one which we were looking for. He pointed it out and I was able to get it into view in my binos and verify that it was the YCNH. I could not see the legs but I did get a good view of the beak, which was stockier, did not seem to have a curve and was black with grey at the base. With the distance and the angle a picture was out of the question and it was a moot point anyway as the bird went back into the canopy a minute later and we could no longer see him. Bob had to leave but he was happy because he got to add him to his 2007 Minnesota list.

After Bob left I decided to circle around the creek to see if I could spot the bird from a different angle. I went up to the road but I could not see anything from the bridge so I moved to the north side of the creek. As I neared the end of the tree line I spotted an immature bird perched in the tree. I thought that it might be the YCNH but I was not sure because the sun was pretty much right behind so I could not see it very well. So I continued to the west around a bush that sits in front of the trees and into the tall grass and there I got a great view of the bird. It was indeed the immature yellow-crowned night heron. I took a few picture then went back to my truck to get my teleconverter so that I could get some good close up shots. Here are a few of the pictures that I took. 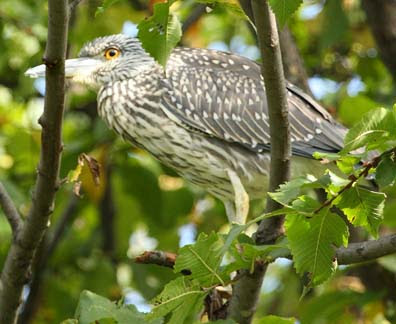 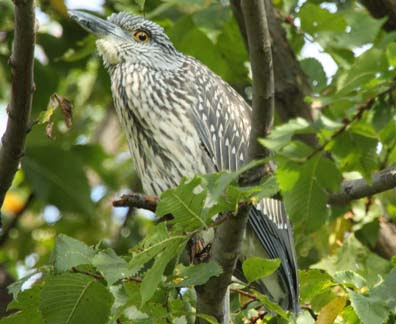 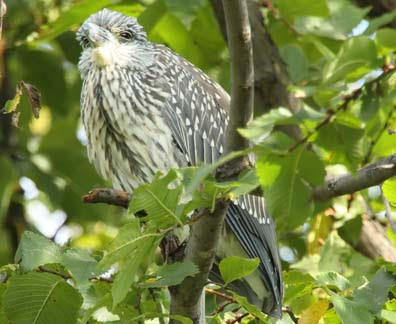 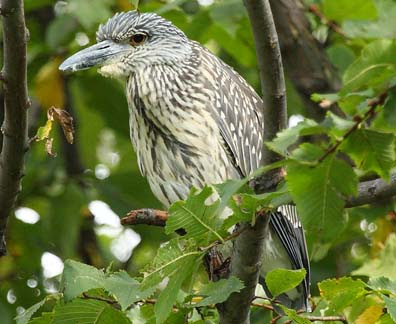 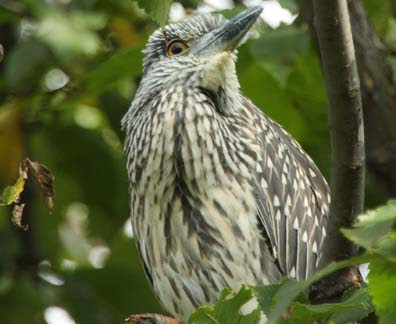 Here is a picture of an immature black-crowned night heron for comparison. 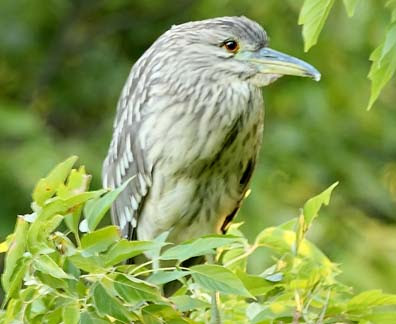 Notice how the shape of the beak is different. The BCNH has a thinner beak that is black on top and yellow on the bottom. The top portion of the black-crown's bill also is longer and overhangs the lower portion. The yellow-crown's bill is the same size on top and bottom and is black at the ends and grey at the base. It is a bit more difficult to see but the spots on the back of the YCNH are small triangles, while the spots on the BCNH are more like elongated triangles.

Posted by Ecobirder at 9:20 PM

Thanks for the insights - we were having difficulty distinguishing a BCNH juvi.