After participating in the Golden Eagle Survey, through the National Eagle Center, and then stopping at Colvill Park in Redwing, MN to shoot some pics of the eagles there I decided to head over to Prescot, Wisconsin to check and see if I could find the Barrow's goldeneye or harlequin duck that have been hanging out around that area this winter. The recent cold snap, the high temp that day was 0 degrees, had frozen up a lot more of the river then on my last trip there. All of Douglas Point was frozen and there was no open water until you got south of the bridges. So I went over to parking spot on the river in Prescott which is just north of the big marina. There were several groups of goldeneye out near the middle of the river, with mallards and Canadian geese closer to shore. I began scanning through the goldeneye from the car but did not see the target birds. I did notice a single duck that was at the edge of the shore. I could not tell what it was because I was facing into the west and the sun was beginning to get low in the sky, so it was pretty much just a silhouette. I knew that it was a duck because of its size compared to the geese around but since it was close to shore I thought that it was probably just a mallard. I got out of the car so that I could get a better angle to look at it with less sun behind it. At that point the duck dived under the water, which was a good indication that it was no a mallard since mallards are dabbling ducks and not diving ducks. I found it in the camera view finder as I started to move out further into the river and as soon as I got a good look I knew that it was the harlequin duck. 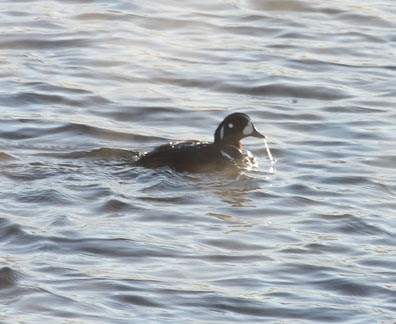 It was difficult to take pictures, with the sun, that was low in the sky behind the duck, the steam, that was rising off the river because the air was colder then the water, and my fingers, getting frost bitten in the 30 below wind chills. While the harlequin was identifiable in all the pics the shine of the setting sun on the mist was playing hell with my exposure. 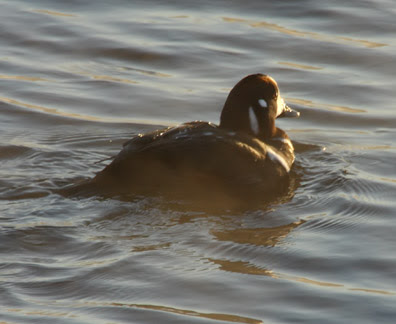 I think that this one was the one that turned out the best. I managed to move further up river to get a better angle on this one and because he was turned into the sun I did manage to capture some of the detail of its face. Even though a lot of the pictures were not as good as I hoped I think that this picture was worth the 45 minutes that I stood out in the cold.
Posted by Ecobirder at 2:35 PM