On Sunday the 13th of January I ran over to Spring Lake Park in Dakota County to play a little with the new snow shoes that I got for Christmas. I have never been on snow shoes before but after ending up in waist deep snow while photographing owls up north a few years ago I started asking for a pair each year for Christmas. It took a while but I finally convinced Michelle to get me a pair. So I went to the park to try and get used to putting them on and did a little walking. On my way home I spotted a pair of red-tailed hawks perched in a tree on a hill over looking the road. One of the hawks took off and was kind enough to soar on some thermals overhead while I shot some pics. 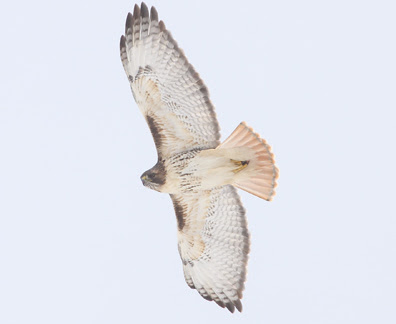 The other hawk must have taken off while I was shooting because it was gone when I turned back around. I also spotted a lot of turkeys on my way home.

There were several groups in the fields and on the side of the road. I learned last weekend that wild turkey are fox squirrels are the main prey of the golden eagles that are wintering in south east Minnesota and south western Wisconsin. 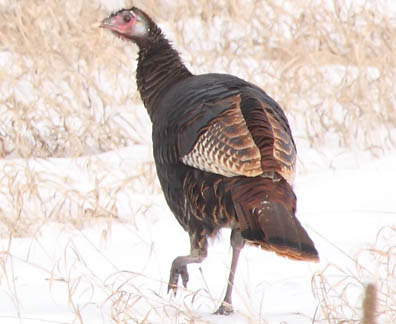 With the large numbers of wild turkeys that we have in southern Minnesota it would appear that the eagles may be celebrating Thanksgiving frequently over the winter.
Posted by Ecobirder at 4:46 AM

Jeff, What kind of snowshoes did you get and how are they working out for you. My wife and I are planning to get some this winter (if the new shipment comes in)

Lovely photos of the turkeys.