After I left Carpenter Nature Center last Thursday my plan was to head over to the MPS airport and check for the snowy owl which has continued to allude me. I was driving up highway 10, coming from Wisconsin, and heading to highway 61 when I spotted a raptor on the telephone wires. I only got a quick glance at his back, he was facing away from me, as I drove by. My first thought was that it was another red-tailed hawk, since we have a lot of red-tails in the area at this time of year, but something just did not seem right. So I made a u-turn, as soon as traffic would let me, and headed back to take a closer look.

I got back to where the hawk was perched and pulled off the road on the opposite side of the street. It was still facing the other way but when I was able to look at it with out worrying about swerving into opposing traffic I was sure that it was not a red-tail. Then it turned its head and I knew exactly what it was. 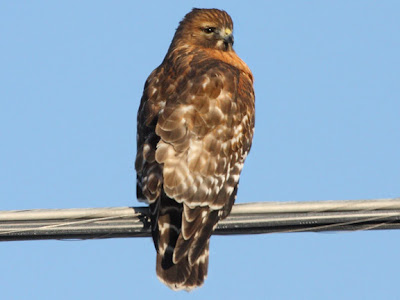 There have been a lot of reports lately of red-shouldered hawk sightings. This is strange because most of the population migrates to warmer climates during the winter months. 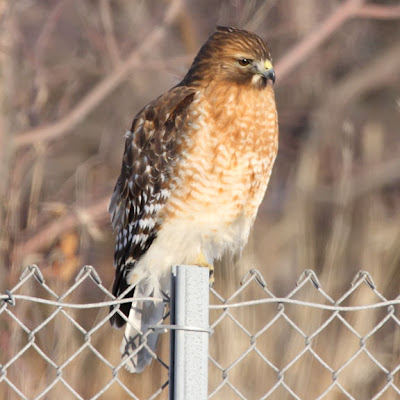 Fortunately this red-shoulder was very cooperative. He took off from the wire and landed on a fence that was about eye level to me as I sat in my truck. 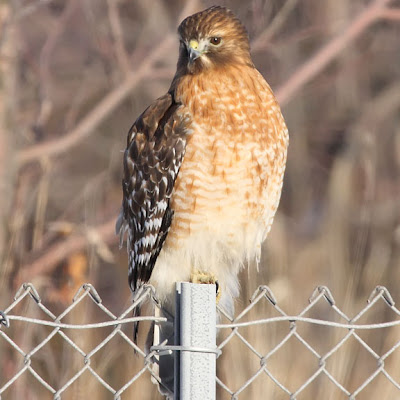 Red-shouldered hawks range almost exclusevily in North America. There are 5 different subspecies, one in the southwest US, mostly California, three in the southeast US and Mexico, and one in the northeast US. The red-shoulders that live in Minnesota would be from the northeastern subspecies, buteo lineatus lineatus, which are larger in size and the only group that is migratory. 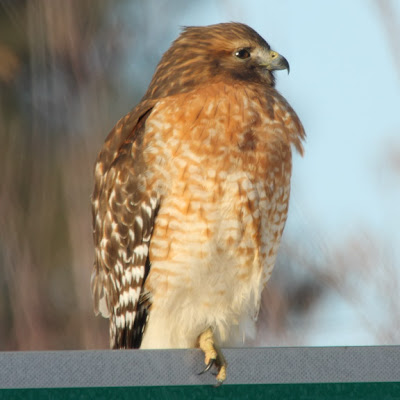 The red-shoulders hawks prefered habitat is deciduous or mixed deciduous-conifer forests and swamps. They prefer having dead trees around on which ti perch so that they can get an unobstructed view as they scan the forest floor for prey. Their prey consists mostly of rodents, squirrels, rabbits, snakes, lizards and frogs. 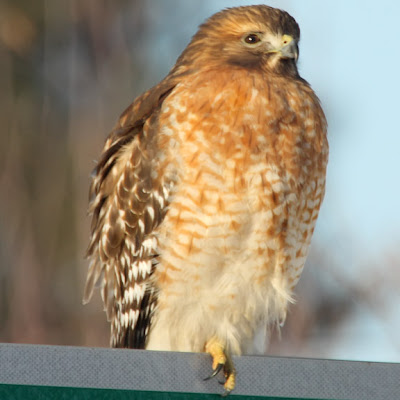 Red-shoulders are monogamous and territorial. Breeding accures between April and July with the same nest often reused from year to year, although they may refurbish it in the spring. 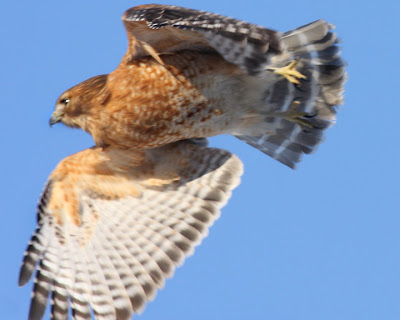 Red-shouldered hawks live an average of only about 2 years in the wild. Even though they have very few predators, great horned owls and raccoons are a threat to the eggs, chicks and incubating adult, collisions with cars, buildings and other man mad objects as well as habbitat loss are contributing factors to their short life expectency.
Posted by Ecobirder at 11:49 PM

Great photos and info. I had no idea their life-span was so short.

Speaking of unusual visitors . . . Just got back from the Minnesota Valley Visitor Center. There's a fox sparrow there frequenting the feeders. Larry Grace got a nice pic of it and posted it at Cameratalk.com

Thanks for the compliments Lynn. Unfortunately it is true that the average life expectancy of a red-shouldered hawk in the wild is only about 25 months. The oldest known red-shouldered hawk lived to be almost 20 years old but I am guessing that it was in captivity. Captive raptors actually live much longer lives. It may have something to do with not having to find food, worry about predators and receiving universal medical coverage.

John, I have visited the Minnesota Valley NWR feeders both yesterday and today but I did not see the fox sparrow.

I just stumbled in here while researching the red shouldered hawk, because I have a nesting pair in a tall pine tree in my back yard. Thanks for the good info. My "back yard" is actually a couple of acres of old hardwoods in a valley with a creek, some miles north of Birmingham, Alabama, which seems to be a good habitat for these birds!

They are very beautiful indeed, and also very elusive, timid, and seemingly camera shy! I witnessed one taking a brown banded water snake last week, which he munched on most of the day, flying from tree to tree and sharing it with his mate in the nest, but the pictures are only fair. I have had much better results with the barred owls who share the range by evening and night.

I too was dismayed when I read that the average live expectancy was only around two years, but I hope this pair will beat that - I think they will, as they have used this nest for two years now, and seem to have been very successful, what with all the crawfish (crawdads, we say), snakes, chipmonks, etc, and the mild climate here.

They also call this bird a chicken hawk (the bane of Foghorn Leghorn: "I'm a chicken hawk and you're a chicken. Are you gonna come quiet or do I have to muss ya up?")

Living here has really brought out the bird watcher in me. We have so many here!

I have been thrilled by a pair of red-shouldred hawks hunting on my property since late November. Should i assume they are nesting close by and if so when could I see babies?

The ones here do hunt right around their nest, so if that's any indication, you could assume they are nesting close by. On the other hand, they can range for several miles, at least. They are very exciting to watch and are very loudly vocal with each other. They will readily abandon nests, though. I think I have ancestors of the original pair nesting and hunting around here now, as well as extended family.