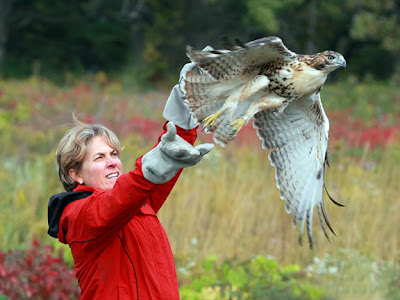 The Raptor Center at the University of Minnesota takes in between 600 to 800 injured raptors every year. The clinic is world renown and they work hard to heal and rehabilitate every bird that is admitted. The highlight of being involved with The Raptor Center is when we get to release a recovered bird back into the wild. Birds are released all the time but twice a year we invite the public to come and join with us and celebrate as we have a big public release. This photo was taken at the fall 2010 release at the Carpenter Nature Center. It is also the featured photo on the 2012 Raptor Center calendar. If you would like to help out the great work that The Raptor Center does you can purchase a fund raising calendar by going to their online store.

Awesome work. How exciting to see them go back into their natural habitat.

A beautiful capture of an amazing moment,

a wonderful shot of such a fabulous moment

This makes me think of the Birds of Prey Center in southern Alberta, as well as the work done by David Hancock in southern British Columbia.

I'll bet it's an exhilirating feeling to be involved in the release of one of these beautiful birds. I'd like to experience that one day.

The red jacket fits in beautifully with the "R" theme. I'm familiar with the raptor center and agree that it does outstanding work. I've watched some of the releases and they're breathtaking!