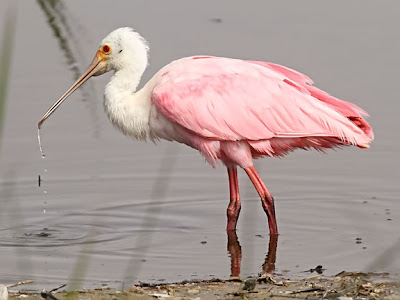 Perhaps the most unusual looking bird in North America is the roseate spoonbill. These large pink wading bird get their common name from their unique shaped beak. They use their "spoon bill" to sift for food, swinging it from side to side as they wade through the shallow water. They eat small fish, crustaceans, aquatic insects, amphibians, and some aquatic vegetation. The bulk of the roseate spoonbill population is found in Central and South America. In North America they are pretty much limited to the Gulf Coast. 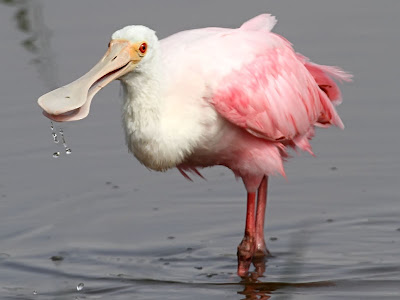 In the United States they are found mainly in Florida, Louisiana, and Texas. In the early parts of the 20th century the roseate spoonbill was hunted for its beautiful pink feathers which were used primarily for women's hats and fans. At one point the Florida population, which is the largest in the US, fell to less then 50 nesting pairs. With the protection of the Migratory Bird Treaty Act and other legislation the population has rebounded and there is now estimated to be over 1000 nesting pair in Florida. In Texas and Louisiana the roseate spoonbills nest on the ground on small coastal islands, in Florida they nest on mangrove trees. These islands nest are endangered by coastal development, oil and other contaminant spills, as well as ground based predators that can reach the islands. Leaving the Texas and Louisiana populations at risk.

Such an interesting and beautiful bird. Love that ruby color.

that is one fascinating bird!

From the first photo, I thought it's a flamingo, maybe because of the color.

What a beautiful shade of pink. That bill is a bit improbable looking though, isn't it?

It was a thrill to see half a dozen roseate spoonbills feeding in Estero el Soldado in San Carlos, Mexico last week. San Carlos is on the Sea of Cortez in the state of Sonora.

These are such beautiful birds. Your pictures are super.

That is an interesting bird..

Visiting for Ruby Tuesday! Hope you can visit mine too:)