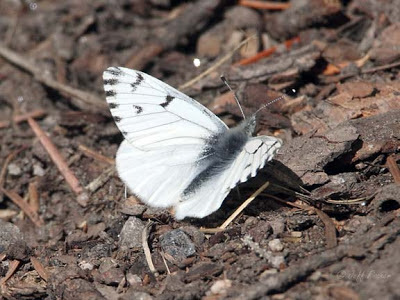 Although this year seems to be a difficult year for photographing butterflies here in Minnesota, because the numbers we are seeing are well below normal, it was one of the best that we have ever had for photographing butterflies in Yellowstone. Since we usually go in late May often there is still quite a bit of snow on the ground. This past year though it seems that they had a rather mild winter so the snow was already mostly gone when we visited. Usually we do not see any butterflies but this year I added 3 new species to my butterfly life list. One of those species is the spring white. This white butterfly gets its name because it is early to emerge in the spring. This is mostly because the over winter as a chrysalis. They are found in a variety of habitats in western North America. In the lower part of their range they can emerge as early as February. Males are often seen patrolling hilltops and ridges where they have a vantage point to look for females. Females are often near to larval host plants, plants in the mustard family, where they lay their eggs one at a time.

Posted by Ecobirder at 9:25 PM

So pretty sitting there. We've had so much rain this spring, rarely a butterfly in sight. I hope that changes as I grow host and nectar plants for varieties that inhabit our area.

stunning stark white butterfly! I've seen only white moths, and they are not nearly as pretty as this.