In the past couple of years I have ended the year with a post reviewing what I thought were the best posts or pictures of the year. As 2009 comes to a close and 2010 begins I have decided to try something a little bit different to end the year. Every year, beginning with 1999, I have made calendars featuring photos that Michelle or I took in the previous year to give as holiday gifts to our family. The first two years, 1999 and 2000, I had printed through the photo labs at one of the national drug stores but I was not happy with the quality of the output. So for the next seven years 2001-2007 I printed them myself on a high end inkjet printer. The quality of these was much better but it was very time consuming, it took an hour to print each page. In 2007 I decided to look into Internet printing and for the past three years, 2008-2010, I have had them printed by createphotocalendars.com. This has worked out well. The product looks good, it costs me less to have them printed then to print them myself, and it takes up much less of my time. This has allowed me to have extras printed to donate to my favorite charities as well as allow friends and coworkers to order them. So on this last day of 2009 I present the photos that are featured in this years Ecobirder 2010 calendar. 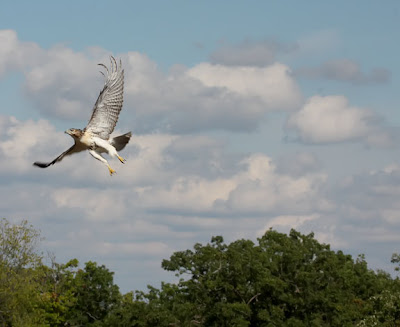 The cover of the calendar is a photo that I took at the 2009 Fall Raptor Release which was held at Carpenter Nature Center. The immature red-tailed hawk in the photo had just been released back to the wild after going through the clinic at The Raptor Center. The couple of times that I have had the opportunity to release a raptor back to the wild, either through The Raptor Center or Hawk Ridge, have been some of the coolest moments of my life. 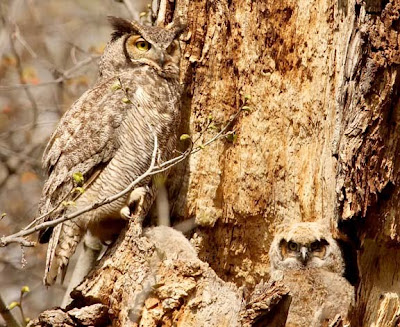 January features a great horned owl female at a nest with two young owlets. This photo was taken in May at Hyland Park in Bloomington, MN. I found out about this nest while I was at the Spring Raptor Release and located it with the help of a couple of crows. This was one of two great horned owl nests that I regularly photographed early in 2009. 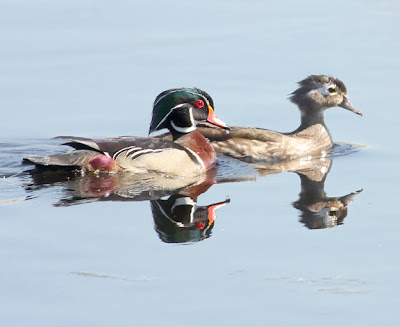 For February I chose this picture of a pair of wood ducks which I took in May at the Wood Lake Nature Center in Richfield, MN. Even though wood ducks are pretty common around here they are still one of the most colorful and good looking ducks that you can find. The perfect reflection on the day that I took the shot added to the magic of the pic which is why I chose it for this years calender. 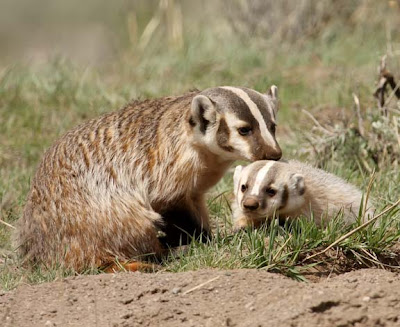 Each year a few of the photos that grace the calendar come from our travels. In 2009 we visited Yellowstone in May and took a lot of photos including this picture of a badger mother with one of her kits that is featured for March. We have seen and photographed badgers before in Yellowstone but this year we were lucky, with the help of many other photographers, to find a den. We spent a total of about 7 hours over two days waiting and we were finally rewarded when mom brought out four kits. April is represented by this Osprey that we photographed just outside of West Yellowstone while we were on our Yellowstone trip. We usually see quite a few osprey when we are driving through Yellowstone but often they are a ways away. This year, since we went to Idaho before stopping at Yellowstone, we took a different route and went through Bozeman, MT to get to West Yellowstone instead of going through the park. On our way through we spotted several pair of osprey nesting close to the road so we stopped to take a couple of pics. 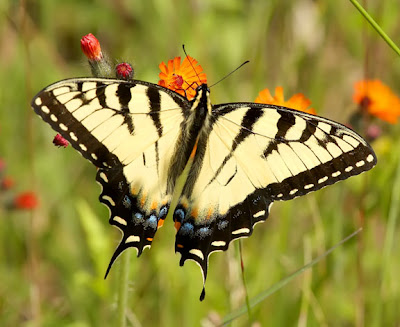 Each year when I am choosing the pictures that will go into the calendar I like to make sure that I give people a little variety. There are always a lot of bird pics and usually quite a few from Yellowstone so I like to mix in a couple that are a little different. One of those for this year is May's photo of an eastern tiger swallowtail. We found this swallowtail on a trip to Necedah NWR in Wisconsin. Part of the reason for the trip was to photograph the endangered Karner blue butterfly, which we got a lot of good pics of, but this was swallowtail fluttering between the wildflowers near the side of the road was the pic of the day. 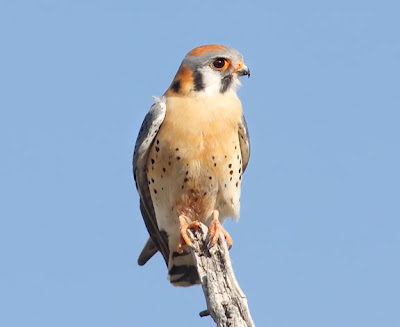 I believe that this individual kestrel has now appeared in the Ecobirder calendar for two years in a row, which would be a first. We first photographed this kestrel in the Lamar Valley of Yellowstone in 2008. That picture was featured in October of the 2009 calendar. In 2009 we photographed the kestrel again, we assume that is the same one because it was in the exact same area, and this year he is anchoring the summer appearing on the month of June. 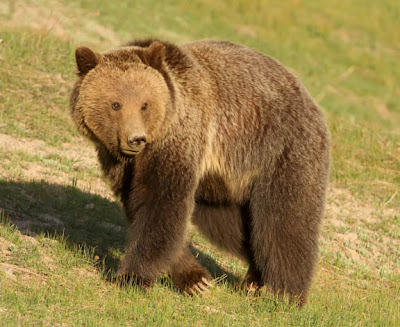 July sports another representative from Yellowstone. We spotted this young grizzly bear twice in the same day, morning and early evening. It was fun to watch him dig ground squirrels out of their tunnels in the morning as he was looking for breakfast, but the best shots, including the one above came in the early evening when the sun was beginning to drop which lit the bear up in a golden light. 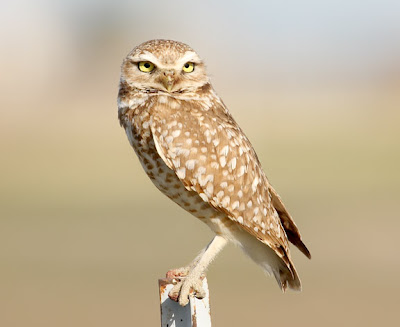 Our Yellowstone trip this year included a side trip for a couple of days at the Snake River Birds of Prey National Conservation Area for their first birding festival. Since we did not have much time and this was our first trip to the area we wanted to spend more time on our own. So we only signed up for one field trip at the festival, a couple of hours viewing burrowing owls. Before going on our field trip we had some time to kill so we went exploring on our own. We found burrowing owls and got some great pics, including the one above which is in the calendar for August, and we almost skipped the field trip, but since we payed for it we decided to go. We were very happy that we did because during the field trip we got the chance to hold and photograph baby burrowing owlets. 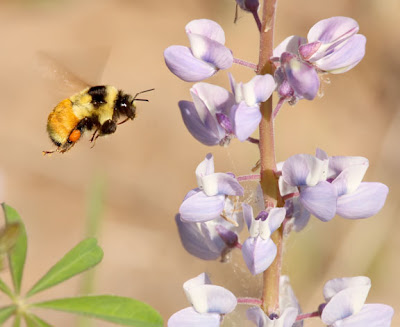 I wanted to include some dragonfly pics in the calendar, especially since I took so many dragon pics last year, but Michelle is not very fond of dragonflies, they are bugs and bugs are ugly. We compromised with Septembers picture of a bee in flight. Bees are insects too but I guess that they are not as ugly, in Michelle's opinion, as dragonflies. What can I say she does have veto power and she decided to use it. 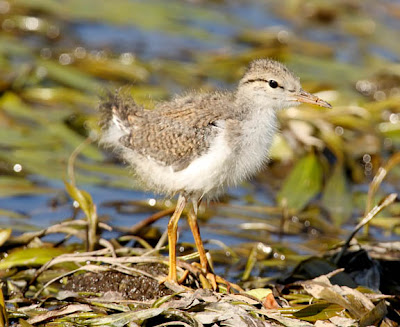 Over the summer I was lucky enough to have an opportunity to photograph two different spotted sandpiper chicks. Both were being raised on the shore of the St Croix River, one near the Snake River Landing and this one further south at Wild River State Park. Baby sandpiper can be tricky to photograph. These were both too young to fly away but they could run very fast and were both experts at disappearing into the grass and weeds. 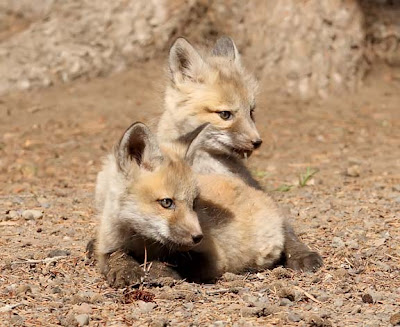 We try to go to Yellowstone mainly in the spring because we have found that is the best time to see a lot of wildlife especially the babies. This year we found out about a fox den so we made a trip way over to the east entrance of the park where we found a red fox with four pups. The pups were playful and cute and not very afraid of the people there taking pictures. This pair of pups I chose for November. 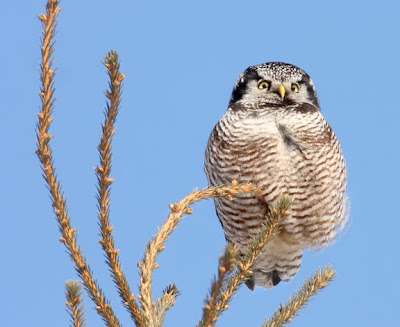 During the winter I spend a lot of time out looking for winter owls and other special winter species. The best place to look for these birds in Minnesota, and possibly one of the best in the US, is the Sax Zim Bog. In 2009 I attended the Sax Zim Bog Birding Festival, for the second year in a row, where I had the opportunity to see many marvelous winter migrants including the northern hawk owl which was my pick for December. 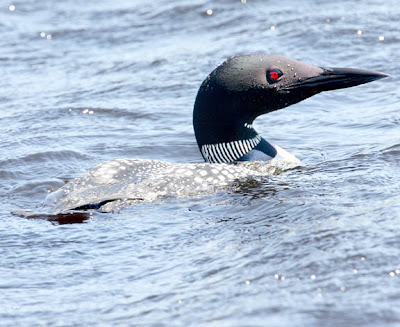 On the Back of the calendar there is an option for an additional picture, as well as a calender for the following year. Since I like as many pictures as possible on my calendars I chose the option and filled it with this picture of a common loon. The common loon is the Minnesota State bird, however I took this picture at Crex Meadows in Wisconsin.
I hope you enjoyed the calendar pictures, I think that they are pretty good representation of the blog for 2009. I hope that everyone has a happy new year and comes back to visit the blog to see what cool pics 2010 will bring.
Posted by Ecobirder at 2:32 PM

incredible shots. Lucky are the folks who recieve this calendar.

I agree, lucky ppl who get a calendar!

What a fantastic gift! These are all awesome photos....you should be so proud!

I was too late to get together a calendar for 2010 but this year I want to collect enough photos in time to do what you have done--make presents. Your calendar is full of amazing pictures!

Wonderful calendar! Happy new year. I look forward to see what you come up with next year.

Your pictures are, as always, superb. An inspiration as photography and such a joy to just look at!

Wow - amazing shots! Just stunning... Happy new year to you and yours.

Wow, great calendar pics! Happy New Year to you and yours!

Gads, I hit the wrong button before...but I wanted to say how much I enjoyed your beautiful photos and lovely stories.

Thank you so much... as always!

these pictures are just awsome!
Happy New Year to you, too.